Over the course of six years of blogging, I have posted only two recipes, to the best of my memory - Banoffee and Bread Pakoda - and they weren't really 'my' recipes - both these earlier posts were a month apart in 2007 - wonder what I was on back then. I don't know if you've figured it out, but my interests lie elsewhere, pretty far away from the culinary department.

And yet, sometimes, the urge overtakes me to make something nice for my kids - usually it's something sweet -so that they know when Mama goes into the kitchen, depriving them of her presence, it's going to be worth the wait. After the disaster with Besan ke Ladoos recently, I was quite discouraged and stayed away from the kitchen, only going in for certain occasions to make my special Halwa and Kheer, using the recipes taught to me by my mother-in-law.

But a few days back, when one of my best friends from college - who is here from America for a short holiday - was due for a visit, I felt I had to bake something for him. He was coming over to meet me and the kids on a Monday afternoon ( yay, sabbatical!) and I had made sure there was good food on the table - but there was no dessert, and this was bothering me.

I remembered back in college how once I had discovered some simple recipe for chocolate mousse - involving melted chocolate and rum - and had whipped up something as an experiment. Amit had come over and practically inhaled it. I had watched, fascinated and horrified, as he downed the entire thing - the whole half-kg mousse. The man had quite an appetite, back then, and I'm proud to report that he maintains the same even today - he's a pro Basketball player, and manages more things than even me, in terms of packing stuff into a day! Me raised to the power 20, to be very honest.

So anyway, I felt like baking a cake for him and his wife, and I figured the kids would enjoy it too. So I wandered into the kitchen and looked around. Eventually, I made a choco-banana-marble-type-eggless-cake ( yes, that's a trademarked Y name - pretty catchy, eh?). 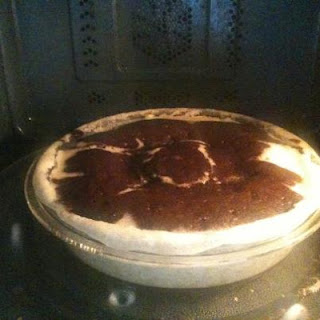 Since a few people on Facebook asked for the recipe, here it is.

It's rather simple, really:

1. You melt the butter in a large microwave safe dish, bung in the oil and the yoghurt, add the sugar and mashed banana and whip up well with a fork. I divided this into two roughly equal parts since I was experimenting for a different effect.
2. You mix up the baking powder in the flour. I divided this also into two parts - 2/3rds and 1/3rds, and mixed the chocolate powder with the smaller part.
3. You basically add the dry mixtures in '2' to the wet mixtures in '1' - folding it in, in the usual manner for cakes - although I find that even mixing it up randomly doesn't make too much of a difference for some reason, as long as you've got the consistency right. You therefore end up with two readied mixtures. This is the point that I add milk to them so that I can decide what amount looks right - you don't want it too thin, basically. I think I used about a cup of milk for each part.
4. This bit was interesting. I took a greased dish and first poured in half of the non-chocolatey mixture ( where the vanilla essence was added, though I don't think it was necessary). I then added half of the chocolate one and to my delight a lovely, albeit uneven pattern emerged. I finished up by adding the rest of  the white mixture, followed by the chocolate mixture. A sort of 'sad flowery pattern' (as Aneela put it rather unkindly on Facebook later) emerged at the top. I liked it.
5. I bunged it into the microwave oven and put it on 'Bake' mood - in 6.5 minutes, it was done.

The whole thing took me about 25 minutes to whip up - and it turned out heavenly! Amit and his lovely wife Sandy - who usually doesn't even touch sweets - loved it! Their beautiful little daughter wasn't interested, but my kids really wolfed it down - even Peanut, who's usually choosy about cakes that aren't fully chocolatey.

So really, it was no big deal to make and it turned out well. If you give it a shot, let me know how it went.

P.S - Hey, Svety - I found that it was on the Banoffee post that you first wrote your comment about how I should write a book - like, 5 years ago! How cool is THAT?
Posted by Yashodhara at 10:02 PM

Email ThisBlogThis!Share to TwitterShare to FacebookShare to Pinterest
Labels: Sabbatical