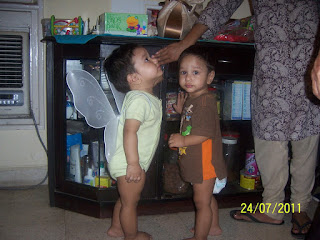 Pickle and Papad at Peanut's little birthday party today. Pickle is wearing the Tinkerbell wings my sister got for Peanut. Yeah right. Some horns and a tail would have been more appropriate.

Err...and please appreciate the brilliant haircuts in the picture above, as opposed to their sloppy hairdos in the pictures below. It may help Vijay forgive me. 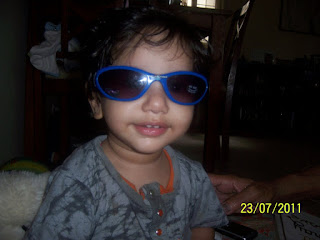 Papad is very modest about his hero-like good looks. 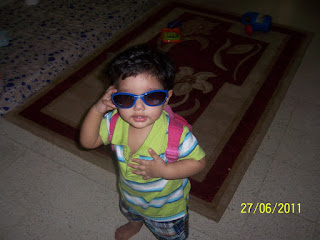 Pickle on the other hand thinks when you've got it, flaunt it. 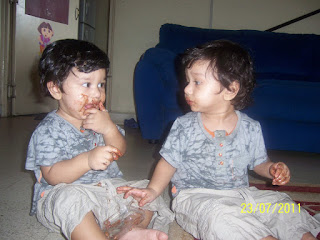 Chocolate time. Ferrero Rocher, anyone?
Posted by Yashodhara at 11:01 AM 11 comments:

...because it means being able to spend a rare Saturday afternoon getting a facial and a pedicure while being able to read snatches of 'Eat Pray Love'.

Did I mention I love being a woman?

...has consisted of exactly two days away from the three kids for the first time in over a whole year. We went to Jaipur to attend Vijay's old pal's wedding, and I had an interesting time making small talk with the ladies before escaping to drink beer with the men outside!

We then woke up early the next day and went all the way to my favourite Sariska only to find that it was closed except for Tuesdays and Saturdays.

Vijay asked the reserve man in frustration 'Yaha baaki din kya karte hai log-bhaag?'. He meant to ask how the staff earned their keep. But the man just replied coolly 'Waapis chale jaate hai' indicating that we should do the same.

So went to Siliserh and had a fantastic breakfast to drown our sorrows, telling ourselves we would go boating in the lake right after.

The sleepy looking manager and his sidekick laughed, gently mocking us and saying we would not be able to eat so much and shouldn't order that much at one go. Vijay and I suggested he give us a try. We promised we would pack up the leftovers and take them with us for lunch. They saw no flaw in this logic and agreed.

About fifteen minutes later, the food arrived and Vijay asked for some butter for the paranthas.

'50 grams, sir?' said the waiter and Vijay thought this sounded about right.

About ten minutes later, Vijay ordered another omlete. We hadn't accounted for the fact that each omlete came with two slices of white bread. And still, strangely, when the waiter came to clear the plates, all the food was mysteriously gone.

Vijay and I decided to give the boating a skip. We told each other it was too hot, but really, I think we were afraid the boat might sink with us in it.

Subsequently, we went to Neemrana and worked it all off climbing up and down the very pretty fort. It was terribly hot and muggy weater, but still fun.

And that's it. By about 4.30 p.m., we were home and our three bawling children were deposited upon us by a very glad grandmother, who left in something of a hurry, as she had to pack and go off to England.

Sigh. I suppose our parents will never know how we feel about them abandoning us to go to the West for the better things in life. Still, we do what we can. We do what we can.

Pickle and Papad are amazing fun. They have started to communicate with each other, saying something that sounds a lot like 'baiya', and of course, they beat each other up and everyone else around them too, with great gusto. They run in opposite directions when we take them to the park and are all over the place all the time. They also kiss each other and we have to separate them because it ends with one of them biting the other. One of these days, I will get around to posting some pictures, she promised.

I am about 65,000 words into writing something new which looks like it's not even halfway there, but am keeping the effort up in snatches of spare time which are increasingly rare, given how busy work and life in general is. Still, we try. And of course, I have taken these guitar lessons which are possibly quite useless given that I have zero time to practice between classes, but I have great fun jamming with the instructor for that one hour which is supposed to be each week but really ends up being once in two weeks.

I was going to tell you a lot more but I see Pickle is up and trying to escape headfirst from crib, therefore...
Posted by Yashodhara at 4:18 AM 6 comments:

...that is to say, some people's twin sons have turned a year old!

And the blog has not been updated with that momentous happening for a whole week. Sacrilege! Oh well, I'll get over it somehow.

Pickle and Papad, the most amazing little men in my life turned a year old last weekend. As is the firm belief that Vijay and I hold, one-year-old's birthday bashes do not make any sense whatsoever since the babies themselves don't know what the heck is happening, and so we said we would do something small, just for the family.

Of course, considering that the family consists of:

*my mother
*Vijay's father
* My sister
* Vijay's two sisters
* The two sister's two husbands
* One of Vijay's nephews in Delhi
* One of my cousins and her husband and two kids
* My Bua and Phoophaji
* Vani, who is honorary family member and her son who by extension is my nephew

...plus the 5 of us and the several maids that keep floating about, it was a full house ( it's twenty three people, in case you're wondering about the grand total) . To say the least.

It was the warmest, brightest, nicest little Birthday party for the two little boys wearing new clothes and looking all grown up. Babies turning Toddlers. The previous day, I had gone shopping. I hadn't been in a nice mood when I went into the store, with lots of stuff going on, and with shopping not being my most favorite activity, but when I got into the swing of it, I enjoyed myself like crazy. I bought three sets of toys for them, skates and a board game and an umbrella for Peanut, little return gifts for the few little kids who were attending, and party paraphernalia like balloons, streamers, party hats, paper plates and Dora glasses for my little girl, who ended up enjoying the party most.

My sister did the honors with the cake - or rather, two cakes from Maxims - lovely chocolate stuff, and Pickle and Papad stood at the ready with little plastic knifes, each wearing identical T-shirts that said 'Mummy's little Man' and gazing with curious fascination at the colorful candle that proclaimed them One Years Old, with various little sisters and a highly pleased Mama to help them cut their cakes simultaneously. I can't imagine a more perfect birthday. Where are the pics, people? I didn't take any, but there were various flashes of light.

Vijay's sisters did a little Pooja for them, and S Didi had even got tiny garlands made up of roses for them, and my little babies looked so incredibly adorable wearing them. Yeah, yeah, I know I'm gushing, but what the heck.

All day, memories of that fateful Saturday exactly one year ago kept floating into my head. 8.30 in the morning, staring at the blood in the bathroom. Rushing to the hospital. Emergency C-section. And all the other stuff that followed. And now, the most important thing was that the two little men are fine, strapping young toddlers already.

Pickle and Papad are the most amazing phenomenon for me. I may have loosely mentioned that I had a little obsession with the concept of twins. Is this common? I loved the Twins at St. Clare's series, and the Sweet Valley Twins series. I once ended up reading a highly inappropriate and somewhat disturbing novel called Twins at too early an age ( do not read it, please). I remember arbitly doing research on it years ago, and have been particularly interested in the connection that twins have with each other, the differences between identical and fraternal twins, and so on and so forth. I always secretly wanted a twin myself, but never ever thought I would be lucky enough to conceive, carry, deliver and raise beautiful twin sons myself.

At work, I joked the other day that I love A/B testing so much that I had twins just to carry out A/B testing with them throughout my life. But it's true. When you have identical twin sons, it's easy to figure out certain things. Such as, when parents say they love their kids equally, it isn't really true. There's a bit of a bias always. Mine is for one of the twins, and I will not disclose it for fear that the other one will one day read this and make my life hell. Hint, though - his name begins with P.

But in short, we have successfully crossed yet another important milestone. Here's to many more Happy Birthdays to the glorious phenomena that we so inanely refer to as

... Mister Pickle and Mister Papad.
Posted by Yashodhara at 9:06 AM 7 comments:

I had been planning to restring
my guitar for a while.
But I had just let it lie.
And then when I tried to play it today,
The E string broke.
The most important string.
It had been over two years since I'd changed my strings.
Which just goes to show how much I'd been playing.
I didn't even know if I could do it myself anymore.
I thought of calling in the expert.
But then I thought I'd give it a go myself.
So I dug out some new strings.
Also pretty old now, but at least still in their wrappers.
And tried to replace the E-string.
First, I wound it the wrong way.
Replaced it, struggled. Nearly poked my own eye out.
Managed to get it in place.
And then tried to tune it.
It snapped. Suddenly.
Frustration.
I almost gave up.
And then I picked out another one.
And tried again.
More carefully this time.
And then when I tried to tune it.
It kept slipping.
Back into a lower octave.
There was still something wrong.
But then suddenly, it was in tune with the rest of the strings.
The most perfect sound emanated from it.
Relief. Happiness.
Even though I knew it could still slip.
For the time being, it worked.
One down. Five more to go.
It would need constant retuning.
But I could do this.


I was just restringing my guitar.
Hmmm.
If I was the poetic type, I might say
It felt like I was restringing my life.
But since I'm not.
I won't.
Posted by Yashodhara at 9:28 AM 4 comments: