The month of July

Chalo, got to go now. I hear crying. 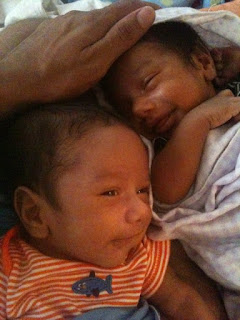 So here we are, then!

I really hate to say it, but it's really ingrained into our thinking.
Fair is Lovely.
I always believed that I was someone who would never support this view. I was one of those people who would tend to get indignant at fairness cream advertising that showed success and happiness being achieved by a woman's skin becoming a few (many) shades lighter.
But recent events have made me realize that in all this discussion, there's less black and white and more shades of grey. And some amount of hypocricy too.
A couple of years ago, when I was on a consumer visit with some young girl's family in Mumbai - This family was not a very well off one at all, and I was quite interested to spend the day with them and observe how they lived. At one point, the young girl's little sister came home from school, took one look at me and said (in Marathi, translated for me a minute later) 'This lady is very fair - she must know good english'.
Not that I am 'very fair' in any case, but I was truly surprised at her reaction, attributing knowledge of english and presumably many other things to my physical appearance. It only reinforced my belief that we need to somehow stop this discrimination.
But then Pickle and Papad came along.
Pickle, the one who has been through much with serious jaundice, prolonged periods in phototherapy in the nursery and many, many injections for the first few days of his life. Pickle is the dark one. The black sheep.
Papad, not only looks like a tiny Peanut and therefore has always been easier to relate to, is also the fairer one.
I looked at the two of them and felt bad - they are supposed to be identical twins! So why this difference, anyway? Pickle would always be compared to Papad and remarks would always be made about it.
I found myself wishing that they were more alike, at least in terms of skin colour - they may grow to be more alike as the months pass, everyone knows that babies look very different at different ages. I thought, why doesn't Papad just become darker with the passage of time! That will solve things.
And then, he did! For a few days in the middle, Papad turned quite dark and his colour was actually identical to Pickle's. This didn't last though, and now he's back to being the 'fairer one'.
But the thing was, when he turned darker, I looked at the two of them and found myself actually wishing that Pickle had become fairer instead of Papad becoming darker. Isn't that just sad? But it's the truth.
Sometimes the truth doesn't make you feel good at all.
The thing is, I relate a lot more to Pickle. He's the 'middle child' like me - older by one minute than his younger, smaller, fairer brother! He's been through so much. I actually feel very connected to him. He's somehow different from the others. He's resilient, he's a fighter. Despite his poor start, he's actually gained more weight than his brother, and become very round and cute very quickly. He's more difficult, sure, appears to also have colic, but in general, I can tell he's going to be the tough one.
Yesterday, a very wise and well-meaning close relative looked at him and said 'Bahut pyaara hai. But Papad is cuter, because he is fairer'.
I was quite shocked to hear this from him. The words were right out there, hanging in the air between us. I laughed incredulously and said 'You can't really have just said that. That's so discriminatory'.
He laughed, too but didn't really take it back. He just added 'Papad is also the smaller, younger one. You somehow feel more for the younger one'.
I said 'Not me. I feel for the middle child. It's tough'.

We left it at that. But while I feel very blessed to have such beautiful little baby boys, this is one thing I am not looking forward to - and I do hope they start to actually have close-to-identical skin colour. Even if they don't, that's okay. Pickle can be the tall, dark and handsome one - like his father.

In the meantime, we lovingly refer to him as our Gulab Jamun, Papad as our Rasgulla.

And Peanut as the Rasmalai.

Yummy little ones.
Posted by Yashodhara at 2:23 AM 10 comments:

Vijay is up till 4 a.m. almost everyday handling the babies. After that, till about 10 a.m. is my shift.
At one point, Vijay remarked 'Honey, this Zone defense thing isn't working - maybe we should try Man-to-Man instead'.
(We both used to play basketball - in our colleges - and even after we got married. Before the many children).
I was thinking, Fine, I'll say I'll take Papad, but he quickly added 'I'll take Papad'.
It's pretty obvious Pickle is the more difficult baby to handle.
So anyway, the Man-to-man thing didn't work out either, so we're back to 'Zone' and continue to take them on in shifts.

Vijay also has configured the sleeping arrangement - one bassinet near the bed and one other little sleeping basket on the bed. Initially the bassinet was further away from us, by the window, but eventually, he brought it closer and closer to his own bed as it's easier to just pick up the wailing baby from it.
However, even the most patient man has his breaking point.
Vijay (lying back exhausted, listening to the sound of Pickle starting to work himself up again) : Should I move the bassinet one more time?
Me: (sleepily)...uhhh...sure...to where? (wondering how much closer he can bring it to our bed)
Vijay (gritting his teeth, pulling his pillow over his head): To where we can't hear him anymore....
Posted by Yashodhara at 10:29 AM 4 comments: