For my birthday this year, my husband got me as bicycle. Sounds like a slightly strange gift for a woman in her early thirties, but it so happens that I asked for it on a whim- after all, what's life without a little mid-crisis?

For anyone who thinks that it's not the most romantic gift on earth, you had to be there when we bought it.

I was critically eyeing the various models on offer at the shop, and finally announced my sole decision criterion -

The salesman happily showed me an all-purple one, and I happily accepted it. I rode it around in the adjoining parking lot, teetering dangerously as daylight faded. My patient husband watched quietly, holding my purse as I rode.

The man began to get the cycle ready, but Vijay then gave me some quiet advice about how the bike looked a little too slender and unsteady, and perhaps I would benefit from something a bit sturdier. ''How about this one instead?'' He pointed to another bike.

''Yes, I realize that, but it's actually a better bike...see the handles...and the tyres...and the...'' He went off into some technical sounding explanations, at which point I tuned out.

''No'' I said ''I don't want Pink''. As it is, I was keen on getting a basket up front - very practical, it would be, I thought, but the fact is it looked a little gay - and I mean that in as non-homophobic a way possible - how else can you describe a girly colored slender bike which has a basket up front? Purple was bad enough, actually. But pink? No way.

Eventually though, upon his coaxing I agreed to give his bike a spin and it turned out to be a better ride. Significantly. I was torn. They didn't have that model in any other color. Pink and better ride, or purple and inferior ride?

Vijay then also gave both cycles a spin to help me decide. I watched him with narrowed eyes. There he was, riding around and around the parking lot, on a girly colored ladies cycle, with the little ol' gay basket up front, and worst, still clutching my purse. The phrase ''Why should girls have all the fun'' went through my head, somewhat irrelevantly. This ludicrous sight then suddenly made me a feel a sharp pang in the heart region, possibly something like love. This man would clearly do anything to make sure I bought the ride vehicle. I thought I must take his suggestion seriously, for a change.

But I still couldn't decide, every atom in my body rebelling against a fully pink bike with a basket. Eventually, I asked the fellow to give me a full view of the bike, sans all the wrapping. He dutifully stripped the cardboard away from the body of the pink bike - and I was delighted to see it was not fully pink - I noted distinct streaks of purple on it.

Vijay nodded unconvincingly, obviously thinking it was extremely gay. But I told the man ''Wrap it up'' and we took it home.

You can therefore look forward to an upcoming set of Cycle Tales, as over the last few weeks, I have begun having my little (mis) adventures on my li'l gay ol' bike...

Now THAT's one hell of a cover

Battle Hymn of the Tiger Mother.

So I finally read the very famous Battle Hymn... by Amy Chua - probably a year or two after everyone else, right? Never mind. Better late than never.

I found the book eminently enjoyable. It was kind of strange because I alternated between thinking 'What, is this woman crazy?' to 'Wow, she's brave to be putting herself out there with all these radical sounding parenting confessions' to 'Uh-oh - why is some of this sounding a little too familiar'?

I am not sure why I was also a little disturbed by the book. Perhaps because I think I'm still personally figuring out my own parenting style - I have three small kids - and I'm just in my early thirties. While that's not exactly young, I know people my age and older who are still single or just married, with no kids on the horizon anywhere for the next couple of years at least. At twenty seven, I was one of the youngest mothers in my own rather limited social circle of friends and cousins. So the fact is that there hasn't really been someone to look up to with regard to what good parenting really means. Well, except my own mother - who is a wonderful lady, but look how confused her progeny turned out, right?

So anyway, I think overall Madame Chua is more than slightly nuts-oid and paranoid and all-around overdoing it as a parent in her very honest, funny, lovely book. And at the same time, she sounds not just so very human, but also so very normal. Despite her deliberately annoying sweeping generalizations, and all those statements and observations about 'Western parents' that are provocative yet probably true.

The only statement that really bothered me in the book, was the line ''Every day you don't practise, is a day you're getting worse''. This referred to the piano or the violin, but it hit me at two levels:

I also totally subscribe to the author's idea that the most rewarding things in life are usually incredibly frustrating at the beginning. I faced that with the guitaring. With the writing. Early failures everywhere, and then finding some sort of beautiful rhythm that makes sure that some things just work.

And that's certainly one area I plan to push the kids as soon as I get my parenting act together - encouraging them past the early failures ( oh all right, maybe threatening, cajoling, bribing, too - whatever it takes!). So that they have a fighting chance at becoming excellent. The potential always exists, right?

And in any case, I take some comfort in the whole 'most rewarding things in life being frustrating at first' thing.

Because if that's true, parenting is all set to be the most rewarding thing in my life sometime in the distant future.

Have you read the book? What did you think?
Posted by Yashodhara at 8:32 AM 4 comments: 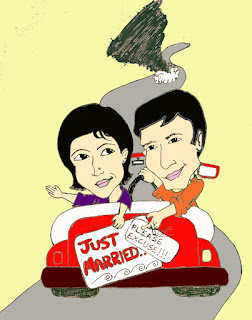 The editors seem to.

Is only a very rough concept sketch, please. Kindly do not react as if it were final!

Yes, that's a Tornado they are headed toward. Ha ha.

Thanks a ton, Divya.
Posted by Yashodhara at 9:57 AM 5 comments:

My Team created this mega-poster and put it up on the wall behind my desk.
I walked in and was mega-embarrassed as you can tell from my general demeanour in the picture below. 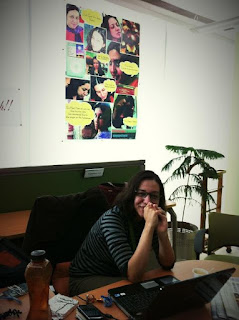 It's got pictures of me ( Damn you, Facebook!) and also my 'Dialogues', including:
* Just get this done TODAY
* Yeh to Dikh Raha Hai, Pappe
* This doesn't Work
* So basically, the bounce rate has increased due to the plug in on the Homepage.
Yes, I'm lovely at work.
Okay, maybe not, but they seem to like me.
I know I love them.
*Blush*
Posted by Yashodhara at 1:23 AM 2 comments:

Just completed a post yesterday, but because I had started it a couple of weeks back, it's appeared as an older post.

Still, you can go here and read it.
Posted by Yashodhara at 8:16 AM 1 comment:

So I continue to hear things like - '' I really don't know how you're doing it? Managing a job, three children and you've written a book? Wow!''

Now, here's the thing. Neither do I. Know how I'm doing it, that is. Which is actually not all that important.

The bit of a bummer is that I suspect I've not actually being doing it all very well.

For what was the longest time - almost all of 2011 - I continued to plod on though, giving my best to what actually comes most naturally to me - my job. And feeling like I wasn't really sure what was going on with my kids, getting behind on Peanut's homework, rarely getting to bathe Pickle and Papad myself, and hardly ever taking them to the park. As for writing, after January 1, I thought I'd give myself a little breather, and the next thing I know, it's over a month later and I haven't written a word. In short, it was all going slightly awry, but I felt too tired and clueless about effecting any real change in life.

And then, a couple of weeks ago, my favorite and only remaining grandmother - Didu - was diagnosed with Cancer. At the age of 90.

Shocking and ridiculously unfair turn of events as this has been, my determination has been to try and spend as much time with her as possible. Given that she lives an hour away with my mother, I had no choice but to cut back on my work committments and for the time being at least, have started to work on a half-day arrangement.

You'd think that would work better, but given that there has been an imminent house shift and set up, and illness - with first Anouk getting a stomach upset last week and then both me and Papad getting viral illness and eye infections - it's not been any better, really. The worst part about my falling ill is that I can't go and visit Didu, for fear of infecting her, which would be a disaster given her precarious condition.

Didu has had her first round of Chemotherapy and thankfully seems to have not suffered the side effects too badly. Except that she's really very weak and sometimes in a lot of pain. It's amazing that she keeps her spirits up and is cheerful in general, expressing more concern for the so called trouble and worry she is causing the family, than any major fear or concern for her own self. Typical.

So net-net, I'm going to have to reorient myself a little. Okay, a lot.

24 hours in the day. So many things to do. So much ambition. So little sleep, which actually proves to be terribly counter-productive overall and leads to illnesses, and other stuff.

Step one, therefore - get more sleep. By stopping the breastfeeding of the twins through the night. And that of course, will be another adventure by itself.

In the meantime, as always - life goes on.
Posted by Yashodhara at 5:39 AM 4 comments: