...really is my favourite month.

The weather in Delhi is beautiful. As I sit here and type, it's a sunny Saturday afternoon and there is a delightful breeze, coming in through the open door at my mom's place. The only thing missing today is Vijay's presence. As sucky as it is to have only two Saturdays off in a month, Vijay has it worse with only one Saturday off!

Anyway, so February is great. It's not just the weather. Many other little things, like the inevitable surprise party around my birthday ( I mean, let's face it - I know I'm getting too old for this stuff, but it's a fun tradition) ; our marriage anniversary ( has it really been six years?) and other assorted things that make it the most pleasant month of the year.

Coming back to the Saturday thing - I really have realized that Saturday is an incredibly important day, and not just to chill out- it's more to do with finishing off your chores and getting some peace of mind and some time to unwind. So the couple of weekends that I get which actually do have Saturdays off, are rather precious.

I took the opportunity to take Peanut off for a doctor's visit - and an immunization which I realized with some guilt, was two weeks overdue. This time round, she started crying as soon as she saw the doctor, clearly associating his presence with the inevitable jab in her thigh. I felt really bad for her, but had a series of questions to ask him. The exercise was pointless because I was distracted by her crying while asking, and so was he, while answering. Taking her outside of the room ( the K was with me) didn't help either because on weekends, nothing the K tries can distract Peanut's attention from me. Eventually, the doctor suggested we just get the injection over with and stop torturing Peanut, and I agreed. It was over in a flash, but her anger lasted a lot longer.

I remembered that right after she was born, the same doctor was trying to give me some instructions on her care, and I was a little distracted, and hoping that he would start addressing those instructions to Vijay instead. He chided me, asking 'Who is the primary caregiver?'. Naturally, this annoyed me and I pointed to Vijay, saying 'Him'. The doctor was not amused and neither was I. Anyway, 19 months later, here we were again - I've been thinking of finding a doctor closer to our place (and perhaps closer to our generation), but again, that's something I haven't got around to doing yet.

Vijay and I took Peanut to Nirula's a couple of days back - she loves the place, and associates it immediately with ice-cream, and walks around dripping Butterscotch crunch all over the place. She also loves the tiny chairs they have for kids and deposits herself on her favourite blue one very regally. We have a bit of an issue while trying to leave, though - largely, because she doesn't want to and has to be dragged out, kicking and screaming.

Ok, the weather really is too tempting to be sitting indoors and blogging. I'm going to grab myself an after-lunch piece of gur ( don't you just love gur? I do) and contemplate my existence on the sunny spot on the front steps.

Yes. I love February. And Saturdays.
Posted by Yashodhara at 12:03 AM 7 comments:

Vijay: Your happy burday is coming up! What would you like, honey?
Y ( thinking hard): Well, I'm a simple person with simple tastes. I think all I want is you to take me to the zoo on Sunday.
Vijay: Whatttt?
Y: Why? What's wrong? It'll be really nice. Peanut can come too.
Vijay: Ummm....
Y: What is with you? Why can't we just go for a nice family outing on a Sunday? Why do you bother asking? I've been told the Delhi Zoo is quite nice.
Vijay (relieved) : Oh, ZOO! I thought you said 'Loo'...

The fight for Peanut's affection has officially begun.

Over the last few days, Peanut has lost around ten percent of her cling-iness to me. She now exhibits a definite excitement about Vijay's return from office, and actually fusses over and hugs him - as opposed to her almost constant irritation with him over the previous two months or so.

She still prefers that I do most of her stuff for her, but I get at least a little bit of relief nowadays when she allows Vijay to occasionally do something.

Vijay stayed at home a day or so over the last couple of weeks, and before I knew it, he had sneakily taught her to say 'Dada' as a response to his query 'Peanut kiski beti hai?'. He did this by the simple means of saying it over and over himself until she started to do so, and then reinforcing it with loud claps and 'yaayyyys'.

So the last time I finished changing her nappy, after a great deal of difficulty -because she insisted on getting up and running away, teetering on the edge of the bed many times - he stood around watching from a distance, and finally asked her 'Peanut kiski beti hai?', and she automatically replied, almost before he finished his question 'Dada'.

Vijay clapped loudly, said 'Yayyy' and then cackled for a long while, summing it all up with a shot at me ' Honey...ghar tum banao...par nameplate mera...'

But who cares? Mostly, it's me and her, all the way. I created a mini-me! 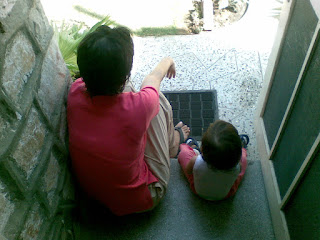