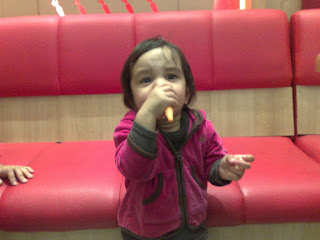 God, I love Nirula's. Seriously.
Posted by Yashodhara at 8:18 PM 8 comments: Links to this post

My brother's wife, V is down from England, with their new little baby - two month old Nikki. We went over to see them last week, and Peanut's reaction to her was strange. She spent the first hour completely ignoring her - and then suddenly seemed to notice that she was not just another toy, but a real little person - the first littler person than her that she has closely encountered. She then kept touching her face (closely supervised by me), and then squealing extremely loudly right in the poor little one's ear. She also looked really, really huge compared to the baby.

My baby's the bigger one now. Wow!

V asked me a question later, saying 'So I read on your blog that you do yoga - do you really do it, or was that just a blog thing?'. I was a little taken aback and told her that I really do it - I thought of adding that not a single thing on my blog is untrue, but since she had asked the question very nonchalantly, probably isn't into blogs in general, and didn't mean anything by it, it seemed pointless.

But it did set me thinking. Nothing I write on my blog is a lie - at best, there may be some exaggeration to make a funny story funnier - but apart from that, there aren't any untruths of any sort.

So what do I write about? Geez, I better run over the last couple of hundred posts and figure it out. Suddenly, there doesn't seem to be anything worth saying. It all looks so frivolous!

Is this a phase? Or was the prolific blogging a phase?

Well?
Posted by Yashodhara at 12:02 AM 7 comments: Links to this post