It seems to be the age of boxes delivered to your doorstep. I've just read about a pamper-yourself box ( a monthly subscription full of goodies for you) and such-like things. Another friend had talked about a similar concept to me last year, and I politely nodded along, wondering what the world is coming to. But then I'm not really into pampering myself with beauty products ( Show me a surprise chocolate-box and you might have yourself a customer, though!)

So when the folks at WonderBoxx reached out to me asking if they could send me a box for review, I was about to tell them they were barking up the wrong girl, until I realized this is something for kids. A surprise box based on a learning theme, delivered to your doorstep each month.

Wokay, I told them, I'll give it a go. Except that, they would have to send me three. I wasn't going to risk my kids getting into a fist fight with just one box landing up at our doorstep.

No probs, they said. Then they asked me to choose the boxes.

Cool, I said. And promptly forgot.

After a few reminders from them, I told them I have an 8-year old and 2 5-year-olds and assumed they'd do the needful.

They politely informed me that there are various themes and I'd have to choose one for the kids.

I hastily looked through the website link they sent me. Looked interesting. I chose 'Light & Shadow' for Peanut, and one 'Nature' and one 'Space' themed box for Pickle-Papad. I had a slight feeling of impending doom about the twins, because I knew they'd both want to grab the Space theme.

Wokay, they said ( I'm paraphrasing here, you do realize that) and then I promptly forgot about this again.

The boxes arrived and were left untouched for a couple of days because I assumed they were for Vijay and he assumed they were for me. The book was launching and I was busy with all that. It was only after some incessant prodding from the kids about what was in the boxes did I suddenly remember that it was probably the Wonderboxxes.

'It's something for you guys!' I magnanimously revealed.

You should have seen the kids. It was like Christmas had come early for them. With squeals of delight, they ran off to fetch the boxes.

The boxes are large and when the wrapping paper is removed, you see some earthy-brown-cardboard designs. They were labelled with the appropriate themes and I recalled with some difficulty who was to get what. Peanut took hers and went off to the sofa while Pickle (the sharper of the two in such matters) grabbed the Space one and poor hapless Papad was left with no choice but to accept the remaining Nature Box.

The kids opened the boxes and started cooing with surprise. I leaned over interestedly - this stuff looked pretty good. There were neat little packages and packets of things - Peanut had a lamp-making set, a projector box kit, some sheets of paper, a book on Light, a Sundial, Shadow Puppets, a Kaleidoscope maker and...

Pickle scrambled around in his box and also found amongst the goodies there the same thing - 'I gotta TORCH too!'

Papad hopefully opened up his box and rummaged through it frantically. And kept looking. And then his little face crumpled. 'No TORCH for me?'

Damn. Damn. Damn. I immediately jumped upon Papad's box and picked up two little packets. 'Seeds? Tomato AND Sunflower? Anyone got that in their boxes? Papad is so LUCKY.'

Pickle and Peanut were quick to catch on. 'So lucky, so lucky.' They muttered insincerely. Papad beamed and all three were once again engrossed in their boxes.

Pickle's Space box included stuff like the Solar System, Moon and Star stickers, a book called 'What is the moon?' and so on. Papad's Nature box, apart from the seeds, had two little plastic pots and a packet of soil, a Nature book, Animal masks and figurine-making sets  - all the boxes had various other little things, including sketchpens, gluesticks, tapes and so on.

The kids sat and played with their stuff for a long time until I told them it was bed-time. They started packing up their stuff and putting the things away. All except little Papad who sat and struggled with the animal masks.

The idea that I gathered from observing these boxes is that the Wonderboxx folks are encouraging as much hands-on and experiential learning as possible. It was all quite charming and it struck me that these would actually make for great gifts - they were at least useful. I realized also that especially for the younger age group, this would require a fair amount of parental help. By the time I finished with this realization, I saw my youngest son beaming up at me, eyes twinkling through the holes in his brand new Lion mask.

'You made that yourself?'

'Yups' said the little one.

I was mighty impressed.

I was even further impressed to discover, days later that Madam Peanut had constructed herself a Kaleidoscope. It was nicely done, and there were quite a few pretty patterns to explore in there. She even took it proactively to school for show and tell, and when I asked her about the reaction of her classmates, she summed it up as 'They thought it was SO COOL.'

I just asked Peanut to describe her Wonderboxx in three words. She has chosen.

'Miraculous.'
'Fantabulous.'
'Exciting.' ( I was a little disappointed at this, was hoping for an even bigger word that ended with 'lous' but had to make do with this)

The only thing I felt could have been done differently about the boxes is that some of the material is a little delicate - I broke one or two of the elements while trying to force them in place. A disclaimer here, of course: I'm an A-grade Clumsy Oaf as far as these things are concerned. I also ended up feeling a little overwhelmed by the number of things to do, but this is again a function of three kids swarming all over the place with their new-found material - I was thinking it might be smarter for me to subscribe for just one box a month and deal with the consequences later ( Note: the boxes are a little pricey at about 1499 MRP as per the label, although I haven't actually tried buying them online yet so I'm not sure of the exact deal. Still a lot cheaper than some of the rubbish options out there for our kids, I think. I still haven't bothered to find out about the 'Furby' which Peanut insists is a must-have for all kids these days. Yeah right.)

In short, I thought these make for great learning boxes for kids. They also do tend to serve as a reminder that I could do a lot more with my kids. Especially since there are three of them, they tend to happily spend their time with each other, and my one-on-one time with them is highly rare.

But yesterday, Papad and I went and messily planted some Tomatoes and Sunflower Seeds. He just came in and said 'Hey! We forgotted to water the SEEDs'. And then ran off importantly to fetch his watering can.

Thanks to the nice folks at Wonderboxx. I think they're onto something very nice indeed. Check them out at wonderboxx.com and their Facebook page here.

P.S - an update. Papad was not happy at not being able to make anything much from the crafts portion of his 'Nature' Wonderboxx, and came up to me saying 'I'm useless!' which broke my heart and made me wonder where he learned that phrase from. I think the Wonderboxx folks could perhaps make the stuff for 3-5 year olds a bit simpler in some of the boxes, and ensure each box results in some clear successes for the kids without making it too easy for them.
Posted by Yashodhara at 8:05 AM 2 comments:

Come and see me this Friday? 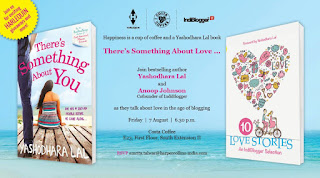 Join me and Anoop Johnson, co-founder of Indiblogger, as we happily launch my brand new book 'There's Something About You' and the Harpers-Indiblogger '10 Love Stories' ( the book that I mentored and wrote the foreword for!)

Come, come, it's books and coffee after all!
Posted by Yashodhara at 7:25 PM No comments: