Vijay and Y's Spa Day Out at Four Fountains

Life has been a little more stressed out than usual, and Vijay and I haven't had time to do anything really relaxing and fun for a bit. So when I got yet another reminder from the team at Four Fountains ( who for a while now have been asking me to come and check the place out), I finally decided enough was enough and this time, we were going for it.

They'd offered me a complimentary therapy since I blog and they seem very confident of their services - I figured it was a good idea to take Vijay along and pay for his massage. That way I could get his perspective too - especially because, strangely enough, he's the more regular spa-goer between the two of us - it's actually just his love for the Thai massage ( woh tod-phod karti hai, toh bada achha lagta hai), and possibly his innate laziness t( he thinks that a regular massage can make up for all lack of exercise.), but either way, he's the massage-lover.

We were both looking forward to it the day before, although the fact that I had booked a Couples Therapy Room for us was making him apprehensive. In the morning, he was positively bad tempered though, snapping at the maids before we left the house. He was muttering to himself as he drove and I finally asked him what was wrong with him. It was then that it emerged that he was unhappy at having had to bathe early in the morning. I had told him to get ready quickly and have a bath by 11 so that we wouldn't be late for our appointment. The two things that Vijay hates on Sundays is to be hurried and to have a bath.

'And now, I'll have to have TWO baths' he said, indignantly. 'One before, and one AFTER the massage. Ridiculous!'

'Oh come on, Vijay.' I tried to cajole him and put him in a better mood.

We reached the Supermart I near Galleria market and spotted the spa quickly enough - at least their branding, which was very prominent, considering that they had taken the main entrance arch up in their bright blue. We parked in the basement and climbed up to the first floor, and soon were in the midst of our 'Spa menu selection.' at a nice reception with the usual cool Spa-type decor. 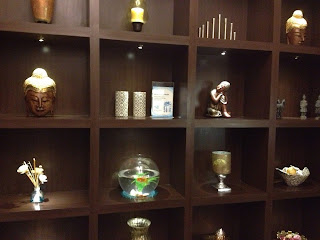 'And this is the Swedish massage...this is the Green Tea scrubassage....'

'That's it!' I said 'I'm going for a Scrubassage!' I'm a bit of a sucker for cool branding.

Vijay looked a lot more confused about his choice. I urged him to go for the Swedish massage rather than the Thai massage that he was tending towards, as usual. He finally agreed. Then he became confused again when the polite lady asked him if he wanted the Swedish Massage with some special Wintergreen oil. 'Does it smell bad?' He asked, wrinkling his nose.

They brought him a sample and he announced 'This smells like Iodex. No thanks!'

'Fine sir - so you'll go for the regular sesame oil?'

Vijay looked like he had his doubts about this and said to me out of the corner of his mouth 'Til ka tel, na? Wo bhi to..'

'Vijay' I whispered back to him out of the corner of my mouth.

'Okay, sesame oil is fine.' He agreed and there was a general sigh of relief that went around the room.

Suddenly he thought of something else. 'I'll have a male masseuse, right?'

'Well, that's it then! We're not going for the couple therapy room...ridiculous...' He whispered toward me 'I don't want a man in the room when you're...'

'Okay, okay.' I said impatiently, even though I knew there would be a screen. Clearly Vijay didn't value any form of intimacy with me when there was another set of people in the room.'Individual rooms, please.'

They gracefully acquiesced to the request.

While our rooms were being readied, the polite lady at reception, who turned out to be a doctor, took a stress test. She asked me a series of questions.

'And do you get irritable and lose your temper often, sometimes, or never?'

Before I could answer, Vijay piped in with 'Always!'

'That's not even an option, Vijay.' I was very irritated and said 'Er, often.'

Sure enough, I was in the high-stress category, as we all knew I would be. Vijay then had the questionnaire administered to him.

'And do you get irritable and lose your temper...'

I almost choked in indignation 'Vijay! Who was snapping at the maids before we left, and ...'

To his chagrin, he also turned out to be in the High stress category. Before he could argue this with the doctor, our therapists announced they were ready for us.

I was led down the dark but elegant corridor - I haven't been to that many spas in my life, but I love that spa-smell. It's extremely relaxing by itself.

I was then treated to be a very nice massage by a young girl, who was much stronger than she looked. I was quite impressed - I asked her later and it turned out to be her first job, and she was only about seven months into it - clearly, the training program she was put through was something else, because she used very confident, powerful strokes. I was glad I'd chosen the Scrubassage - it was basically the same as the Swedish massage, but with a green tea scrub which was very relaxing. I topped it up with a head massage for another ten minutes - we'd discussed beforehand that both Vijay and I would get that at the end of our massages. I rounded it all off with some Steam and finally, a shower.

In the initial part of the massage, I found that I was still tense, my mind wandering and working overtime, as usual. But then I began to relax and really enjoy myself. I even came to a few important conclusions about the next few months, but that's fodder for another post.

So anyway, here's a quick few things about today's experience -

a. Overall, Four Fountains offered good service and a great massage. I'd give it four stars out of five. I take away one star only because I'm being picky and there were a few small things I thought could have been better - more accessible toilets, for one. Also, there were a couple of times the electricity went - not their fault really, but it was just a little distracting during the therapy.

b. I thought the prices were quite affordable - they were lower than some of the others I've seen, although since I'm not a connoisseur, I can't quite say for certain. I did note that they seem to have some pretty killer membership schemes, so if you're a regular with that sort of thing, I would say you should definitely check it out.

c. I liked the fact that at the end of the therapy, the lady at the reception handed over two diet and de-stressing booklets, as well as a little bottle of something which she said would help us relax if we put it on the soles of our feet before sleeping. It made me smile, that tiny complimentary bottle.

d. I'm really not sure about how to compare - or even the necessity of comparing - Four Fountains with the one sole Spa experience I had last year at the Aresa spa - but I know that at the end of this session, when I walked out with my husband at my side into yet another rainshower that briefly caught us before we made it back to Basement parking - I was feeling like a million dollars - which was the same thing I'd said in that post. So net-net - massages are good, and I think I might start treating myself to one on a slightly more regular basis than one-a-year.

In the car, I asked Vijay how his massage was. And I got a grumpy 'Arrey yaar...the massage itself was good...but then, just as I was falling asleep, the guy said 'Sir, time for your head massage.' and woke me up! Tchah!'

'But the massage was good, right?' I pressed 'You liked the Swedish? Better than your Thai?'

Vijay had been nodding along in agreement until I reached the last word, at which he started to protest 'Thai ki toh alag baat hoti hai...wo jo tod-phod karti hai...'

I closed my eyes and leaned my head against the window as he went on. I felt better than I had in weeks. That was enough for me.

Posted by Yashodhara at 7:57 AM