The days of the week whiz by - even on Saturdays, where I volunteer at the Happy School, or occasionally take a Dance-fitness class in my complex, or try to accomplish sundry other chores - things are usually very rushed.

At least on Sundays, things slow down a bit. It's more of a Family day than other days, which is pretty much the norm for most people.

A Typical Sunday these days includes the following -

I watch my three kids whiz around on their cycles at dizzying speeds- their race track is through the drawing room and kitchen, and they take the turns at breakneck speed with surprising skill. I then notice they are all screaming 'Shut up!' 'Shut up!' at regular intervals.

I stop the oldest, Peanut, from setting such a bad example. 'Peanut' I scold 'Why are you saying a bad thing?'

She pauses breathlessly and then explains 'Mama, it's not a bad thing. We're not saying Shut Up!'

'Then what are you saying?'

Pickle-Papad pass by in a blur, and I hear them screaming the words. I turn to Peanut and say 'You guys ARE saying 'Shut Up.'

'What does that mean?'

'It means that ...' she thinks hard and then says sulkily 'But it's not Shut Up.'

I know exactly what is going on. The kids long to shout Shut Up because it's banned, and now they've come up with this reasonable facsimile. I think about it for a while, and decide that there's probably no lasting harm from this. 'Okay, fine. But why can't you play something else now?'

'Sure. In a while.' Peanut takes off again, her hair flying behind her as she rushes to catch up with her brothers who are just turning the corner. I can hear them more clearly now, as they scream with renewed enthusiasm...

Vijay tries to read the newspaper, with Pickle and Papad perched on his head.

'That's Shashi Tharoor Uncle....see, beta, he always carries his red comb in his pocket whereever he goes...you can see the tip of it in this picture...'

'Actually son...he doesn't talk much at all...I think his beard and turban are bound too tight...''

''This is P Chidambaram Uncle.'' 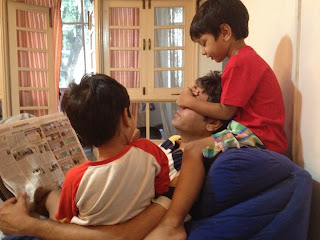 Last Sunday, I tried a deviation - I asked Vijay if he wanted to take the kids to the Bio-diversity park.

He said categorically 'No. I want to sleep.'

But the kids had heard me. 'Biodivosity Park!' Said Pickle.

Uh oh. Now I'd done it. But still. I was irritated with Vijay for being lazy. 'Okay.' I told the kids. 'Mama will take you!'

'Aap gaadi chala sakte ho, kya?' The question was from a surprised Papad.

I informed my son that I indeed could drive the car, it just so happened that I didn't drive often.

Vijay said 'Kya hai....why do you have to take them? Can't we relax on a Sunday at least?'

I was more irritated by this 'They deserve to see something new for a change.''

'What will they see? Some trees and plants? All trees are the same.'

I rolled my eyes at him and started getting ready, calling to my maid to get the kids ready too.

''What are you doing?' Vijay demanded 'You're going to drive them? You'll get stuck in that area with all the pebbles, I'm telling you.'

'I most certainly will NOT.' I said with all the dignity I could muster.

'Okay, listen, why don't you wait half an hour and then I'll take you?'

'Honey.' He said in the manner of a long-suffering husband '80 percent of the things I do, I don't want to do anyway. So how does it matter.'

This really got my back up. 'Whatever. Don't need you to come if you don't want to spend time with the family.'

I muttered and got ready, with him watching me. I demanded 'Where's the Honda key?'

'I can DRIVE the Innova, Vijay. I've done it before.'

I stalked out of the house with the key, my maid Rinki and the 3 kids in tow. I was in a bad mood, and the fact that Pickle and Papad kept asking 'Aap Innoba chala sakte ho, kya?' wasn't helping.

We reached the car, and I assessed the situation. Damn. Why had our driver parked it in this corner? There was another car parked perpendicular to it, just a few feet behind it. Hmm. This would take some doing.

Five minutes later, I was sweating and breathless, and the kids were irritated, calling from the back. 'Mama. Aapko Innoba nahin chalana aata hai kya?'

Rinki looked out from the back and informed me with happy confidence 'Haan, abhi lagne waala hai.'

I turned around to glare at her. This was incredibly frustrating. Just then, the kids cried out 'Dekho! Daddy aaya!'

I saw Vijay approaching languidly in his track pants. The Honda key dangled from his fingertips and he wore a supremely amused smile on his face. In a panic, I tried one final time to back up the car and turn out, but I was mortally afraid of hitting that stupid vehicle thoughtlessly parked behind me, and Vijay's presence made me even more nervous. Finally, I pressed the brake and opened my window. He came up to the driver's side, and asked innocently.

He smiled at me again, and opened the door. Wordlessly, I shifted over to the passenger seat and let him get in.

It was a very short ride to the Biodiversity park, but it felt very long to me with Vijay's sideways grin and the children proclaiming from the back in a deafening chorus.

It was also the main topic of conversation on the way back home an hour later. 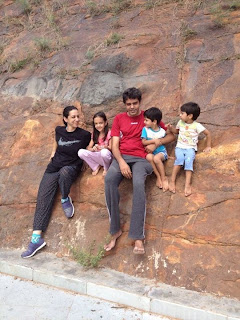 Perched like monkeys on the rocks at the Bio-diversity Park.
Posted by Yashodhara at 1:35 AM