Parenting Notes: The Holidays Wind Up

With the long summer holidays now over, the kids go back to school. It's a welcome change because it was tough keeping them occupied in the summer, especially the twins who tended to get cranky and threaten to hit everyone, and then make good on that threat for most of the day. Peanut was a tad easier, especially because of some wonderful activities started up on Jun 1st in the kids library that we have in our community - a separate post about that soon.

I was particularly proud of myself this year for the way in which I handled Peanut's homework. That is, I made her actually do it, and reasonably well in time, which is quite a contrast from the previous year - when she did about 40 days homework over the last two days. Perhaps it's largely due to my sabbatical, but my attitude towards homework has changed. I still get mildly irritated when it involves having to go out and buy stuff, or in cases where it looks like it's more the parents' homework than the kids' - but I think it's fairly useful, and gets me to connect with what's happening at school and how much she's absorbing. It's still a little too early to say, but for the first time in my life - I may actually not hate homework.

It is true. Just as the holidays were coming to an end, we gave in to young Peanut's plea ( we HAVE to go on a holiday - all my friends have gone...why can't WE go on a holiday...ad nauseum) and went off to - hold your breath - okay, let it out, it was Sariska. For about the fourth time in the last few years. Seriously, there are such few doable holidays around Delhi as compared to Bangalore...but never mind that.

Net-net, we decided that Peanut was right and we had to get away, even if it was just for a day. Of course, it actually ended up being just for a day - we left on Friday and came back on Saturday. We all piled into our Innova - which we had decided to buy when we learned that we were having twins, and a good buy it was. The three kids, Vijay, me and our help R. And off we went, with a prayer on our lips.

It was a surprisingly pleasant holiday. Peanut was terribly excited about going to 'Sophia' as she mistakenly referred to it initially. Pickle and Papad were a little more apprehensive, especially since we were staying at a place called Sariska Tiger Heaven, and they thought they would be greeted by a tiger there. We reached after a four hour drive, with Vijay criticising my choice of resort because it was a grand total of four kilometers away from the entrance to the sanctuary. The only reason I didn't give into my urge to throw something at his head was that he was the one driving all of us.

Despite the fact that it was so hot, we bravely set out for an afternoon safari, and thankfully it became quite cool as we rode into the jungle for about three hours. The kids were terribly excited by all of this, and of course, they took turns to fall asleep. I enjoyed the safari, as I always do, and apparently there are now about seven tigers there, though as always, we didn't see any although we came face-to-face with plenty of other bemused fauna. As far as I'm concerned, I don't really want to see a tiger there anyway - partly because it'll take away the mystique of the whole thing, partly because I think I'd be a little scared and not know what to say and mostly because it's just habit for me to go to Sariska and not see a tiger.

Anyway, in spite of the enthusiasm of our guide, who seemed determined to give us an eyeful of the striped animal if it meant spending the night there, we managed to get out at about seven pm and get back to our hotel. One of the nice things about the place was that there was a pool there - to my irritation, young Peanut had started whining while on the jungle safari about wanting to get back to swim in the pool. All three of the children had quickly overcome their initial wonder at seeing so many animals, and were now treating all the peacocks, deer, neelgai, langurs etc almost as if those lovely creatures were mere cows on a Gurgaon roadside. I pointed out to Peanut that she could swim every day back home but could only go on a jungle safari once in a while, but this logic didn't impress her, and she kept up the pressure about the pool. I lay there exhausted on the poolside long-chairs-which-I-don't-know-the-names-of and watched the three kids splash about, happier than they'd been the whole day.

The next day we went to Siliserh, another one of our old favorites and went boating. Again, it was terribly hot by the time we got there, but since we were on a speedboat and also constantly fearing for our children's lives, the minutes went by rather quickly. The kids were quite thrilled by this part of our little holiday. They then proceeded to take turns to have their respective meltdowns on the drive back home, and about four exhausting hours  later, we were home- happy to have have successfully had our first family holiday, and even happier to be back home.

I told myself I must do a review on this place. I found it on Google and then checked out a few reviews on Tripadvisor. We'd never stayed at Sariska before, so I wanted to be sure about the place. The reviews were good, and the owner was quite helpful when I first spoke to him on the phone. However, the email that he was to send me with the details never came. I followed up with him and eventually spoke to his manager, and was told something about a poor internet connection.

Anyway, I got the details I needed in another phone call with the owner, and eventually we landed up - he had been nice enough to give us directions and so on. The place was just a little out of the way, but not enough to make a substantial difference, even though the last 800 meters were off the main road and slightly difficult to navigate.

The resort itself was quite nice, in terms of size and location, but I felt it could do with better maintenance. The rooms were spacious, but on the outside, there was a bewildering use of the color yellow, which was a rather unfortunate choice, in my personal opinion. The staff was nice and helpful although they were quite mystified at our request for a Coke and proved somewhat unequal to the task - they said they had a really small fridge and though we wanted the Coke with lunch, they only managed to give us one by dinnertime. Not that I'm personally opposed to places which don't believe in Coke, and in fact, I really liked the fact that the meals were the home-cooked variety, with paneer being a bit of a constant, but a surprising serving of chicken at dinner making Peanut's day.

The only issues I had with the place were that the owner wasn't as responsive once we were actually there - I tried speaking with him a couple of times, but he got cut off and didn't bother to call back. Also, I was surprised by the fact that he didn't know all that much about the Sanctuary itself - he advised me to take our own car into the sanctuary and that's why we decided to brave it in the afternoon in the first place - because we were planning to keep the A/C on for the kids. But when we got there, it turned out that no cars were being allowed in except on Saturdays and ( I think) Tuesdays, and so we were forced to go in the jeep. It turned out well, but it made me wonder - if someone's making a living off running a resort at Sariska - and believe you me, the stay wasn't cheap - wouldn't they at least know more about the main attraction, the reason why they got any clientele at all? I thought it was a bit strange. The other thing that irked me was the fact that they gave us some really random soap for three rupees that didn't lather at all. I mean, come on. If you're charging someone thousands to stay for one night, at least give them a regular bar of soap to use. Don't scrimp on the basics, guys. But then- such is life, I suppose.

Overall, however, I was reasonably happy with the stay there, and the kids had a good time. I'd give it about two and a half stars out of five, maximum two point seven five.

The extra .25 was added because of the messaging on the mug that I noticed in the bathroom. I give you a picture of the same below. 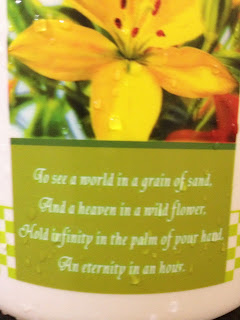 To see a world in a grain of sand
And a heaven in a wild flower
Hold infinity in the palm of your hand
An eternity in an hour.

I was impressed by the profundity of it all, and this put me in an unusually good mood. Of course, I was tempted to add the lines -

'To soar into the upper reaches of grandiosity,
Undeterred by your own inherent nature as a bit of a potty-mug'

It was all very charming. 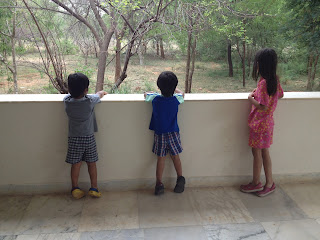 The kids looking at a peacock after their lunch. The place was full of 'em. 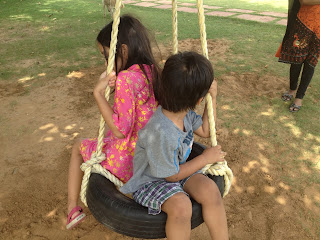 Peanut and Pickle share the tyre-swing hanging from a tree. Another charming little touch. 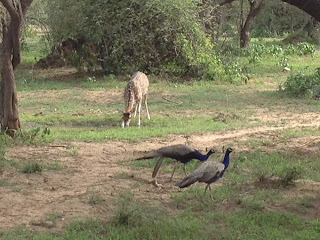 Deer and peacocks in the sanctuary. 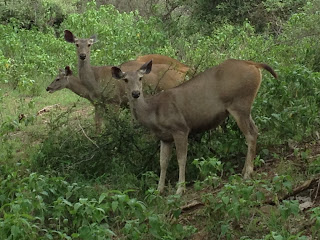 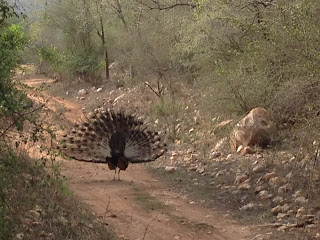 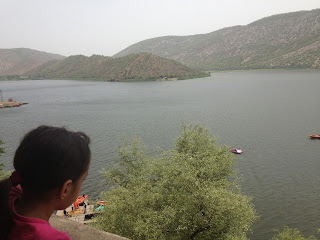 Peanut looks out at the lake in Siliserh. 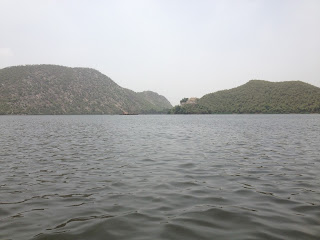 View from the boat. 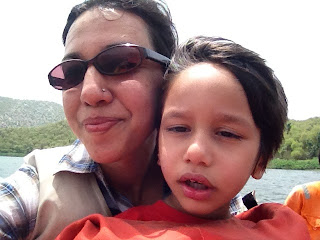 Me and my littlest son, Papad as we ride the speedboat across the lake. He doesn't look too happy but I think I more than make up for it.

Posted by Yashodhara at 9:49 AM