Of late, Peanut has been kind of bringing herself up - well, it's not as bad as all that but the twins definitely stake their claim on my time, and attempt to beat her and each other up if they sense any competition in their quest for Mommy-time.

So I thought that since Vijay and I were taking a day off to accomplish some long-pending chores, at least a part of the day would be spent taking Peanut to the Kingdom of Dreams. Vijay had to do something else during that time, so I said I would take her myself and was secretly quite pleased to get some alone time with her.

I took her to the Culture Gully and we spent a blissful three hours there, mostly eating - what else can a four-year old do there apart from playing in the sandpit, which she did for a while too.

We started with Jalebis! She had about five by herself, which delighted and alarmed me in equal measure. 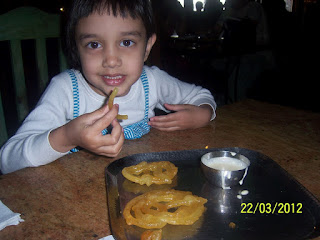 One nos. Peanut stuffing herself with five nos. Jalebis

She then started 'counting all the pretty things', which was my idea but after a while I had to request her to stop because it was driving me nuts.

Then we walked around, and she played in the sand while I watched with unusual satisfaction, and then we wrapped it up with a meal of some Chicken Noodles at the Tangra Market restaurant - luckily we were also witness to a very nice dance - I missed the announcement about where it was from but at the risk of sounding almost as culturally ignorant as I actually am, all I can say is that it involved a lot of skilful hopping around between large sticks and struck me as distinctly North-Eastern. Peanut enjoyed it, and that's what counts. 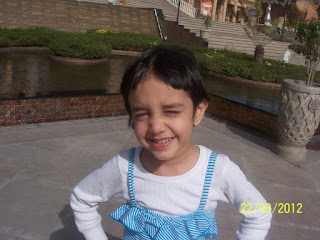 Peanut Posing outside the Culture Gully. She has my fake camera smile!

It was a fun day, and a great break between vaccinations for 3 screaming kids, dental appointments for 3 screaming kids and dealing with getting the wood-working done for a flat one is trying to put on rent, visiting a dear recuperating grandmother, while simultaneously attempting to finish setting up home in a newly-moved-into rented accommodation and about a hundred other little things.

Net -net on the Kingdom of Dreams Culture Gully - The place is nice, but I did kind of expect it to be bigger and have more stuff to do. But it's done up beautifully and I was quite amazed at having been so out of it that this was actually my first visit there!

P.S - I came back and proudly showed Vijay my 'Royal Card' telling him enthusiastically that this would entitle us to Rs.200 off for every subsequent visit. He only shook his head and said ''I can't believe you work in Marketing''. But what does he know, anyway! He's only a husband.

P.P.S - Trying to post pics of Peanut on her Day Out, but blogger is out to get me today. Later.

Posted by Yashodhara at 1:31 AM