So the nice folks at Wonderboxx have decided to send me - or rather, my kids - more boxes for review after the last time I wrote about them. Which is very nice because overall, it's a great concept and I really like the fact that the kids have something to look forward to which doesn't involve staring at a screen all the time.

The Wonderboxx is an innovative kind of monthly box that enables kids to learn as they play - each box is based on a particular theme, and contains a carefully selected set of items, which lets kids create things with their own hands. The Wonderboxx people said they'd like to send me two boxes each month, which I thought would work great - one for the 8 year old and one for the 5 year old twins! Sounds good in theory, right? Except that naturally, the twins had a meltdown at having to share their box. Still, I braved it valiantly, telling myself that this way they will learn to share, which is always such an important thing.

The theme for the younger kids' box (The Kiddos box, meant for 3-5 year olds) for September is Super Seasons. 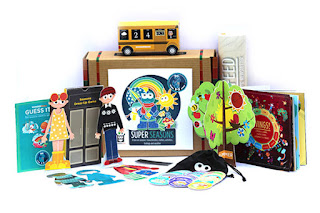 The twins, once they stopped crying about who would get to grab what item in the box, started to play - there was a game that involved players picking up cards and guessing items suitable for a particular season ( e.g. scarves, boots for winter versus shorts for summer) - they were not too enthralled by this and it didn't hold their attention much.

Then there was a 3D tree which Papad picked up and tried to make. I sat down with him and told him how he was supposed to glue the sides of the tree together so that we would get four sides, one for each of the seasons. He resented my approach, which was to read the instructions and try to follow them and he snatched them away and ran into his room. He emerged a while later, proudly carrying four separate sheets of A4 paper on which he had stuck different sides of the tree. He seemed very happy with this and said he would take it to Show & Tell. I was like, whatever, dude. Have it your way. The important thing was he thought of a way to use it himself, which was nice.

The Seasons box contained a bunch of other things, including an Seasons-Wardrobe where characters have to be dressed appropriately for each season; an Activity booklet and a Storybook - the Activity booklet is something that Pickle seemed to find interesting because he started colouring in it - he couldn't play the word games, which is where Peanut took over and started to fill it all up. The storybook is one which we haven't read at bedtime yet. I have fast discovered that as far as the Wonderboxx for younger kids goes, it really does require a fair bit of parental involvement. I've also discovered in the process my own short fuse and lack of patience with my own kids when we're making something and I think this is a major flaw that I should work on. I really admire playschool teachers and in fact, all teachers of small kids for their patience. They should all get double or triple of their salaries and if I were in charge of this decision, I'd do it right now.

Peanut on the other hand, is frankly delighted with her box - the theme for her box (called the Ginomo set, meant for kids over 5 years)  this month was Air & Wind. 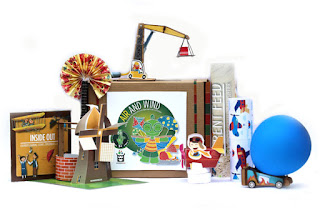 It came with  kits to make all sorts of little projects - so far, she's read all the instructions herself and made a windmill and well thingy, a balloon-powered little car, a pretty little fan, and basically enjoyed every aspect of the box thoroughly and is already waiting for the October one. Here's what she wrote on her own blog about it -

Ok so here is the next blog as I said. So the thing is that a few months ago mom got me and Pickle Papad a wonder boxx. The truth is that we all love it. Of course any child would love it. My theme was light tales. Inside the wonder boxx there were ever so many things! I made a kilidoscope followed with a monster projecter box. There was a free torch, Tape and glue. Pickle Papad and me were delighted to here that if mom reviewed the wonder boxx then we would get 2 free each year!!! So mom said Yes and yesterday morning we got 2 new wonder boxes. Pickle papad were sharing 1 so I got the other. This wonder boxx theme was Air and Wind. I made a windmill and a magic fan plus a balloon car. I really enjoyed myself. Pickle papads theme was Seasons. They made a season tree. I am looking forward to next month cause we will get another wonder boxx soon. I don't care what theme I am going to get, cause what I really care about is the wonder boxx.


PS Mom has told me to write this so that she can copy half of  this on her wonder boxx review!!!

The last line there in the PS - she means I had told her to write this so that it would make up half of my own review but she clearly got a little confused. Still, that helped.

Some pictures of the stuff she made. 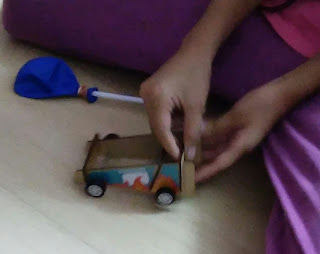 The little car powered by the balloon you can see in the picture. She'd blow up the balloon, attach the pipe to the back of the car and watch in delight as the car went a little way away as the balloon slowly deflated. 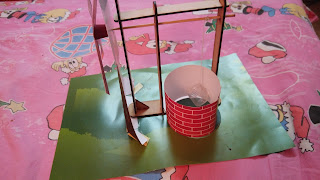 The above is the windmill she created. There's a little bucket that rises up and down from the well to drive home the concept of how wind energy can be harnessed. 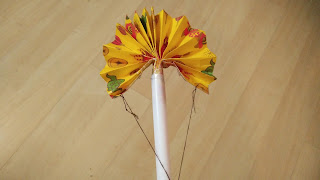 The above is a fan that she made. The little strings are attached to a paper pipe and the fan obediently opens and closes as you push the pipe up or down over the straw.

Oh, yeah - and as you can see below - we actually went and used the recipe in the 'Cooking With Kids' section in the newsletter that comes with the boxes, and made Peanut Butter and Chocolate and Oatmeal Cookies - I put in too much milk and therefore they didn't really set properly but the twins loved them anyway! 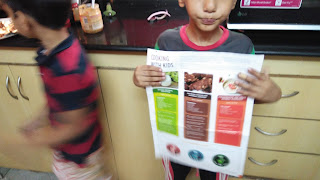 Thanks Wonderboxx folks, and keep them coming. One suggestion since I know you'll be reading this - can you look at creating a box which actually helps kids learn about, label and most importantly figure out how to handle their feelings and emotions? It's a little abstract as a concept but I'm sure you guys can figure it out. If it's not already in your pipeline of product ideas, please do consider putting it there!

And readers - you can subscribe to your Wonderboxx here.

P.S - the Wonderboxx folks have told me that there's already a box planned in the next couple of months on the theme of feelings. Mind-readers, they are, or just good at their research!

Posted by Yashodhara at 3:18 AM