To Bharatpur & Back Again: Part 1 - The Taj Mahal

Unlike a lot of other families, we don’t get to take longish vacations, but this year Vijay and I resolved we’d go on a few mini-breaks with the kids. During the summer holidays, we went to the Garden Valley Resort in Nighlaat, which was quite a delightful experience I meant to blog about but didn’t, and then we took a day trip to Jaipur and Chowki Dhaani which also the kids really loved.

Last week, we decided to make use of the Dussehra holidays to go to Agra. The kids hadn’t seen the Taj Mahal, and actually neither had Vijay – I only vaguely remembered going there as a kid. We then decided to combine it with a trip to the Bharatpur bird sanctuary – we discovered this was a decent season to see the migratory birds. I also remembered a cousin rhapsodizing about the Wildlife SOS bear sanctuary and thought we’d try and fit this one in.

The kids were so delighted that they spent several days drawing up multi-coloured Taj Mahals. Pickle’s was something else - and I couldn’t quite believe he’d made it himself – very unlike his other scrawled drawings. 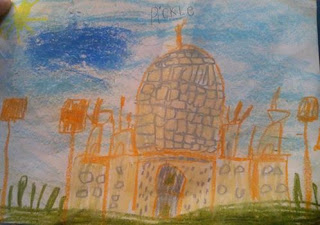 We set out at 10 a.m. on the first day, much later than we’d initially planned – the drive from Gurgaon to Agra took about 4 or 4.5 hours. The trip was relatively smooth because we had our driver Kamal along in our trusty Innova. Smooth enough for Vijay, who chose to sit in front to ‘navigate’ and simply stretched out his legs and enjoyed the rode while I struggled in the back with three wriggly kids. Only when he turned around and saw my murderous face, the husband decided to come to the back for half hour, but was soon up front again, this time stating that he needed to play DJ because he had connected up his iPhone to the car’s music system but the speakers needed adjustment and so on.

He was then tempted to drive the car because the road was just so wide and empty. We whizzed along with him occasionally driving faster than he was supposed to, and yet slower than many cars around us. I reminded him to be careful – we had small kids in the car.

I waited until this exchange was repeated 3 more times, with little Papad getting increasingly frustrated each time. When I noted he was on the verge of tears but Vijay was still being thick, I informed him ‘He’s talking about the SONG, Vijay.’

‘Eh? Oh! Sorry, sorry, Beta.’ Vijay immediately went back to the passenger seat much to the relief of Kamal and me and everyone else in the car, and started to play DJ to settle our whimpering son. Our car was soon filled with the sound of Not a Shirrt on my baaack, Not a Penny to my name…Lord I can’t Go back Home This-Away, which my kids sang along to with great gusto, especially Papad.

We reached Agra and just then my mother called Vijay, saying she knew someone there who could accompany us to the Taj. We protested saying we would surely find it ourselves, it was kind of famous, but she was adamant. It turned out to have been a very good decision to request Praveen-Ji, an official of the Government of India to accompany us because basically as his guests, we got to beat the loooong lines of people standing outside waiting to get in.

The Taj was very, very beautiful – breathtakingly so, almost as good as Pickle’s Drawing. Peanut took the best shot. I don't know how she managed it, but it was wayyy better than all my attempts. 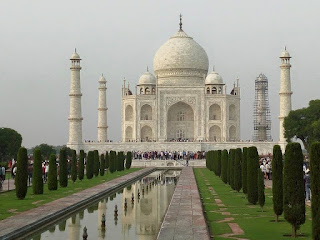 To my surprise, the kids actually enjoyed the whole thing, looking around, feeling the stones, marvelling at the snatches of the story that they overheard from the guide we’d hired for the purpose. It helped that we also took a Camel cart ride ( very very smelly) on the way in, and a Horse Cart ride (not smelly, much better) on the way out.

I took a shot as the sun was setting of this thingy right next to the Taj. I thought it wasn't that bad, but it's pretty sad that this was the best I could do. Still, here it is. 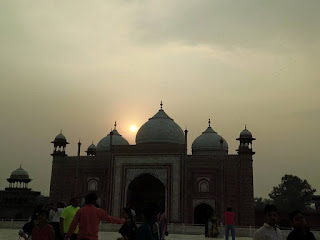 It was actually very crowded, but according to Praveen-ji, the traffic is actually about four times more on the weekends, which I was very startled by. I was glad we were there on a Wednesday. The kids were allowed to buy little Taj souvenirs which they claimed they would all use in their class for Show & Tell. In typical Indian style, the asking price was Rs.150. I paid Rs.40 for one, and Vijay managed to haggle the other two down from another vendor to Rs.25 each.

And then we bade goodbye to the Taj and Praveen-ji, who was quite unhappy that we didn’t take up his offer for a Papadi Chaat nearby, and then we were off to Bharatpur. It was about 7.30 p.m., an hour or so later that we reached the Surya Villas hotel – a fairly large property, done up in old-world style with a big courtyard area and all – it was nothing as fancy as the Baagh where Vijay and I had stayed a couple of years earlier, but we hoped it would turn out to be good value for money. A bunch of foreigners were enjoying a puppet show when we passed the courtyard and there was a swimming pool nearby with a DJ, which I personally thought spoiled a bit of the old-world charm. We ran into the owner, a courteous man, and his warmth helped make the place seem a little better. The rooms were pretty decent, and we were given a mattress for the kids. Of course, they all immediately jumped on the bed and left the mattress for me and Vijay. Fair enough. Not.

That first night at dinner I got a little annoyed with a waiter who delayed bringing our food and seemed to have eyes only for the white people, a boisterous contingent of about 12 men and women, the other guests staying at the hotel. The kids were getting so hungry and cranky that I got up with them and told the fellow that he might as well just have the food delivered to our room. On the way to the room, I met the owner’s son (and co-owner of the place) and told him in no uncertain terms what had happened, including the fellow’s reticence about joining two tables together for us ( Vijay and I finally ended up doing it), the delays and various other little misdemeanors on his part. The owner looked quite shocked and expressed his apology and said he’d speak to him.

Vijay followed me and the kids up to the room. He waited until I was a little calmer and then pointed out that it looked like that waiter was overworked and overwhelmed – he seemed to be one of the few guys managing the place. I hotly argued that he seemed to have enough time and attention for the white folks, and we’d waited a whole hour for our order with tired and hungry kids. But the more I thought about it, I had a nagging feeling that my husband was right. Maybe there was another side to the story and I could have been more patient. Maybe I’d got the fellow in trouble with his employer whereas maybe he hadn’t really meant to be neglectful. I really, truly hated it when Vijay was right. Would have to figure this out with the dude the next morning.

The food was quite all right except that the cooks had been rather liberal with the spices. Also, this was the first time ever that I'd had noodles garnished with dhania, and it was strangely good.

The Kids passed out early enough and soon Vijay and I dropped out of sheer exhaustion too. Good thing. The next morning was to be an early trip to the famous Keoladeo Bird Sanctuary.
Posted by Yashodhara at 12:16 AM