The 'Sorting Out Sid' Preview Day at Harpers


A few days ago, we had a really cool 'Preview' at the HarperCollins Office in Noida for 'Sorting Out Sid' with 5 very special people, who have two things in common - their love for books and blogging!

By the time I reached the office, they had all already been through a large portion of my book. We had a really interesting chat about writing, blogging, the book and various other things - Jaideep's captured it all pretty well in his ongoing series - here and here.

As a part of the busy day they had, one of the tasks they were given was to come up with a description of Sid using 5 adjectives and the one who was the closest was to be declared the winner by me.

So, without further ado, here are the entries:

Descriptions of Sid as sent to me by:

1. Yatin: ( A man of few, but powerful words as the interaction with him as well as his review of Sorting Out Sid shows).

2. Jaideep: (who appeared to be at no loss for words either during our interaction or in his email that contained the following adjectives! Had a great time answering his barrage of questions and reading his posts about the day, especially this one.)

3. Anant (having a super-busy week and therefore submitting these on twitter. Anant was the only one I didn't get to meet that day - but someday soon, we shall catch up!)

4. Priyanka ( Her week seems even busier, because this just came in over SMS! Enjoyed interacting with her, and all her questions !)

'Sid according to me is Capricious, A Total Buffoon, Callous, Effervescent, and Lampoon - who lives by sarcastic wit.' In Short, a cocktail of a man!

Okay, so far, out of the above entries, I'd say that the guys are pretty close, but the lady seemed to have got into Sid's character pretty well ( maybe it's a woman thing...we tend to nail the men nicely, right Priyanka?)

HOWEVER...the winning entry has to that of the gentleman who  decided that the words in the English language by themselves cannot do justice to Sid's character, and therefore invented words himself for the purpose of his analysis. I like the way Arvind Passey combined his entry to this contest with a review of 'Sorting Out Sid', and therefore, I present to you the winner -

Who describes Sid as :

Huh? I thought so too...until I read his post right here, which explains it all pretty well. After which, all I had to say was 'Brill-arious'!

So that's it. Mr. Passey Wins. And it was lovely meeting everybody! Thank you all for being a part of this :) and to Dinesh and Ayushi from the team who actually thought this all up!

I leave you with my favourite picture from the day. 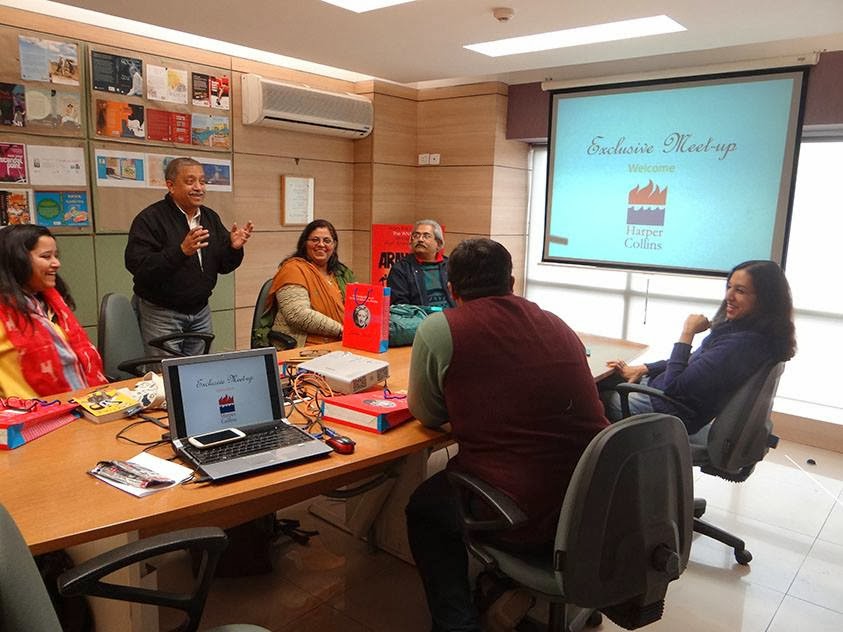 I don't quite remember what Arvind was saying, but it must have been very funny given everyone's reaction, including mine!

Posted by Yashodhara at 3:35 AM