It's been a rather eventful couple of months, and it's kept me from posting. In a rare burst of energy though, let me share a few things that have been going on with me.

I finished my work assignment early September, and got busy with helping organize a not-for-profit event called the 'Globeathon - the walk to spread Women's GYN Cancer awareness'. With very limited time and funds, we still managed to get about 400 people to turn up for this walk ( which also happened in over 80 other countries!) on the 29th September. It was quite an experience organizing this thing. Someone I know who's been advising me to cut back and focus on activities just rolled her eyes when I told her I was doing this. After looking nonplussed for a moment, she threw out her arms and said 'Oh well. Why not!!'

So anyway, October was exciting. I underwent two trainings of very different kinds. One to get certified as Practitioner Marketing Faculty for HT's new Bridge School of Management, for which I am likely to start teaching a marketing course end of November - that should be a lot of fun and very enriching, especially because it's a facilitator-type role and the students are people with significant work experience.

And the second was a training in Zumba with an excellent instructor called Lucas Mthenjane - (a superb teacher, super-fit with a Martial Arts background - and a good-natured hilarious mimic of failed attempts at dance steps, too). Before you ask, no, I'm not going to make a career out of this one: but this weekend, I start a batch in my own complex - twice a week in the mornings and as much for my own fitness as putting my newly acquired
'License to Teach' to use!

Now, here was the slight catch. I fell rather ill, and so did the kids, due to the change of weather - and was very, very low energy over the last few days. And that's when moments of doubt began to hit me. Was I really up to all of this? With growing alarm, I realized that I had also loaded several things onto Saturday.

Ack!! What had I done? Each of these things require tremendous energy, and here I had piled them all onto the same day. Not to mention the work that would be required during the rest of the week, including the piece I'm trying to do on my own Marketing Consulting Gig and leave us not forget the Writing Ambitions. The week was packed, but Saturday was impossible.

I debated cutting out the Happy School thing briefly or shifting it to another day. But this simple Saturday morning activity of teaching spoken English at this school for underprivileged kids brings me so much joy, and to those kids too - not to mention, my own, all three of whom clamber into the car with me and contribute to the chaotic time in class. I actually felt bad that I haven't been going regularly there for the last few weeks and redoubled my resolve to go again - I called up the principal, the lovely Mrs. Kamal Capoor and apologized, reaffirming my commitment to show up post Diwali.

Next was to call my own Zumba instructor, under whose guidance and mentorship I've learnt over the last year - 'Sameer! I don't think I can do this! It takes sooo much energy...and I've got all this other stuff...'
'Will power, Yashodhara...give yourself a chance...also, you've been ill, yaar, that's the only reason why you're feeling like this.' He said briskly. 'And lastly. Shift the class to Sunday.Bye.'

That's what I did - this simple shift caused a little chaos to a couple of prospective students, but will hopefully make my life that much more manageable.

I'm packing so much into life these days - my father-in-law is rather disapproving about my overall lack of focus ( as he perceives it) , but I've figured that it makes me happier than anything else. Besides, the way I look at it, it's nice to be able to do a whole bunch of things.  The important thing is for me to quit imposing arbitrary deadlines on myself and creating unnecessary pressure, which has been a bit of a habit. It does take a lot of planning; and it's most critical to have my health ( and that of my family) in place before I'm able to do even one of these things properly - well, we've just got our flu vaccinations ( and that's another story) so hopefully that will help!

However - I'm fairly certain that a time will come really soon (in the next month or two) when I'll have to shift gears and work on something single-mindedly, to the exclusion of some of the other things that take up my time. But in the meantime, this is how it is, and now that I'm feeling a little better after almost fifteen days of that damned viral fever - it ain't looking all that bad!

Oh and - lastly, before I forget. Here it is! Out in the next couple of months sometime at a bookstore near you, dudes! My second book. More on this soon, too. 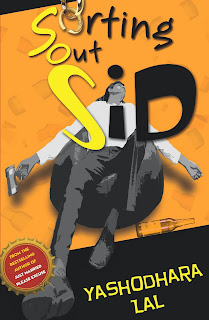