In Defense of Not Forgetting My Phone.

There's a clear wave of concern about the overuse of technology in our lives - phones, social media, cameras and the combination of these three powerful forces is resulting in our missing the moment and disconnecting from real relationships. This is showcased by the now-famous 'I forgot my phone' viral video below.

This really does ring true to an extent. There are so many instances where I've found myself sitting around with my family where there are moments where everyone starts to play with their phones. And my husband drives me crazy with the checking of his work email at home, and listening to Osho lectures instead of me ( although I don't think I can blame him for that last one much - it's perhaps a tad more calming listening to Osho than me. Just a tad.) Yes, there are many times that this phone-and-social-media obsession can get particularly excessive and therefore annoying.

Still, here's why I don't lament and regret the shift as much as some people claim to ( and it's worth examining when we do complain about the all-pervasive role of technology in our lives, whether things really were all that rosy in the past.) For me personally, I think life is decidedly better when it comes to the context of relationships and memories now. Here are just a few reasons why -

- Moment and Memory Capture: Ever since I switched to an iPhone - the clarity of the pictures on the camera resulted in, for the first time ever, my ability to capture innumerable precious moments with my children on film. You cannot carry a camera around with you all the time when you have three kids running around, and I think I've now built a really great collection of moments to look back on over the years. Including truly priceless pics like this, which would never have been possible had I been running around to get a camera all the time. Does it keep me from 'living in the moment'. Er...I don't know. I think it's great to be able to enjoy a situation and also keep a record of it. It doesn't always have to be a choice. If it is? Yes, I'd rather close my eyes and listen to Farida Khanum or watch a play than try to get a good angle for a shot. But I don't find a reason to choose in every situation, just some. 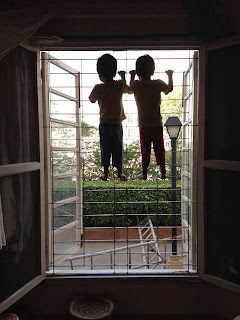 -Moment Sharing and Memory-Keeping:  Facebook and its phone application has allowed me to store the best pictures over the year - the fact is that when you're trigger happy, the best real filter (for me) is the pics that I think are worth sharing with my family and friends. It's comforting to know that that record is there. Hopefully Facebook will not shut down in the next decade, and if it does, it will allow us to take our albums with us.

- For fostering really close relationships: I haven't found something better than Whatsapp. I'm part of at least four different groups of about 5-6 people; a group of ex-colleagues, a family group, a group of batchmates from my older company - this is one form of social networking that I have found really meaningful and it's actually put me back in touch with people that I care about. In fact, I'd say this one single feature of group chats on Whatsapp has actually lifted my level of connect with people.

- Long-distance real-time moment-sharing: Facetime! Like a lot of people I have relatives living abroad and if there are going to be little cousins in the family growing up thousands of miles away from each other, at least they have the ability to occasionally 'see' each other and share all-important news like 'This my new toy' and relevant updates ( 'Waaah - he broke my new toy').

I could go on, but I think the point is made. Are relationships suffering because of technology, specifically because of the ubiquitous mobile phone? No - relationships suffer because sometimes we behave like idiots and don't set rules about our use of that technology. Too much of a good thing is bad - we've always known this. So why not put in place some ground rules for ourselves, with the people we care about - and recognize our own flaws and bad habits and just work on them - like with everything else?