A friend and colleague, whom I initially got to know through the wonderful world of blogging, launched his second book sometime earlier this month. I went for his launch-lunch or whatever you call it and then promptly got busy with my own book launch and forgot to blog about it till now. 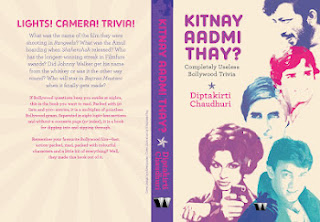 Dipta, one of the most eminently pleasant persons I know, apart from his tendency to make really awful jokes, has written Kitnay Aadmi Thay. I've got his book on my bedside table and am alternating between that, Committed by Elizabeth Gilbert and Jaane Bhi Do Yaaro by Jai Arjun Singh ( the last was recommended by the selfsame Diptakirti at the blogger's lunch).

So anyway, that particular lazy Saturday afternoon, I arrived all excited at Zura, the new restaurant which turned out to be quite a happening joint. Except that nothing much to do with Dipta's event was really happening, given that I had arrived three minutes before time - which meant it was before Dipta's arrival as well as the nice publishing people from Westland. I sat there twiddling my thumbs and cursing Indian Standard Time and then a few people sauntered in, including the Man himself.

I was rather pleased when I saw Dipta - apart from liking him and being glad to see his Buddha-like countenance, I was actually really happy to see that he was simply dressed, wearing crushed jeans and a bright orange kurta, which he clearly thought was dressed up enough for the occasion. I secretly thought this was a good idea - keep it casual ( never mind the fact that I later went and bought two little black dresses and a new pair of shoes for my launch). For the time being, it was just a nice, friendly, warm atmosphere.

Dipta had run a contest of some sort and the winners of his Bollywood quiz also landed up, quite excited to be there, and they had many questions for the author. We tried to make him give a speech but it didn't really happen. I met Gautam Ghosh and Arcopol Chaudhuri ( for some reason, the Bengalis appear to find each other), and overall, there was a lot of kidding around, Bollywood talk, attempts to embarrass the author - the usual launch stuff, really.

The book itself promises to be an interesting read - I've currently read only the first few chapters, but given the pace at which I'm getting through stuff these days, don't hold your breath for a final review. What I can definitely tell you is this - there's a whole bunch of really obscure things in there which, if you're a fan of Bollywood, you will not fail to find interesting. I also like Dipta's style - in real life, he makes really bad jokes that make you groan, but with the written word, he employs a certain, easy-to-read, dry humour that definitely has you smiling. I just checked the book page on Flipkart and it seems to have excellent reviews. So I leave you to go through those and judge for yourself.

As he promises though - it's definitely worth a buy. ''Less than the price of a Rowdy Rathore ticket'' He told me ''And none of the headache that the movie leaves behind''. And if that by itself is not a compelling promise, I don't know what is.

P.S - the food at Zura was beyond excellent. I'm hoping to also do a similar event for my blogger friends. Anyone interested? Speak up and I shall do the needful later this month. Good time to delurk, really.
Posted by Yashodhara at 2:45 AM