It's been quite a couple of weeks.  In between the regular commitments, launching both my new books 'When Love Finds You' and my first kid's book ever, 'Peanut Has a Plan'  - and this along with travel to Mumbai for a work conference and some serious effort at racing against time to get ready not one, but two presentations for an important discussion.

1. Atta Gallata is a wonderful store in Koramangala Bangalore - they stock only Indian authors, which is very, very refreshing. (And by the way, have you read this piece on the elitism in Indian media written by my publicist at Harper's?)Did an event there last Saturday, it's a warm, wonderful place. If you're lucky enough to live in my favourite city, check it out. The funny part is it turned out to be started up by a first cousin of my batchmate and friend from IIMB! 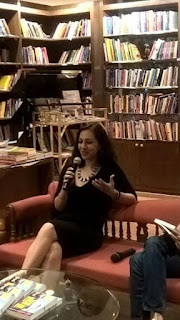 Holding forth at Atta Galatta Women's Web Event. Books all around and a live audience. Never happier!

Women's Web had organized this event and it had an audience of 50 very engaged women who asked great questions on the theme of 'Women at Work.' My co-panelists were the impressive Vaishali Kasture, Partner at Delloite, and Malini Gowrishankar, Entrepreneur by day and VO artist by night, who did an impromptu reading of my book blurb.

Here's a link to a video of Vaishali asking me a question about being multifaceted.
Here's an article they wrote featuring me prior to the event.

Some other pictures from other recent events - 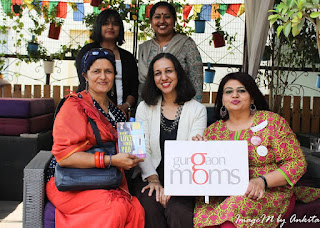 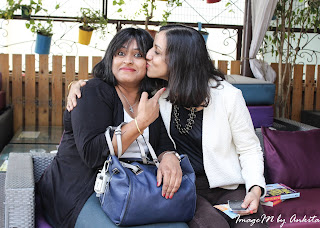 Gurgaon Moms event at Cafe Nowhere. That second one above is me and Amrita, my favourite book marketing person of       all time. See how she's finger-pointing even as I show affection? Typical. 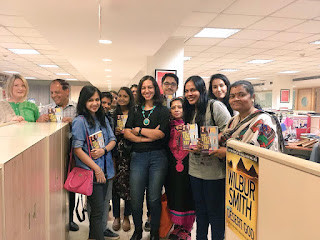 With a special bunch of bloggers delighted to be in conversation at an actual publishing house office, Harper's office in Noida. 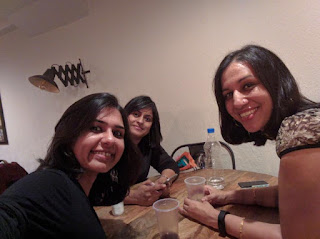 With Manasi (my editor) and Amrita (aforementioned publicist) at the Truly Madly Office.

2. With all of this, I happened to be out last weekend and missed my younger son's Papad's school performance. Which would have been quite heart-renching had I actually missed it - because thanks to technology and timing, I managed to sit in my hotel room at Lemon Tree and watch the whole thing on FaceTime. My husband very sweetly arranged for enough battery and front row seats so that I didn't miss a moment of the stage performance. The kid was somewhat assuaged by my recounting of the whole thing, including his rather shy dance on stage and the fact that he 'fell down once but jumped up immediately like a Jack in the Box.'

I was glad to be here this weekend because this time it was Pickle's performance. He too was in a dance and had an actual real dialogue which he delivered with great panache even though he stood just to the right of the spotlight so only his front-row parents could see him. I must say that even though technology is wonderful, it was great to actually be here and be with him during the entire morning madness of 'Will you PLEASE get on your Khakhi shorts, and for the love of God, do NOT wear that white shirt until you've finished your breakfast.' This was Vijay, of course, I couldn't care less but it was nice to be able to hear all the yelling. The performance was both short and sweet and then we were home for the afternoon; and in the evening, we went together for a musical performance at the school where Peanut and I learn music for a 'Terrace Jam' which was also great fun. Even though Pickle & Papad found Soya Katori packets meant for twenty people and finished them all by themselves - after sweetly handing around single pieces to the rest of the audience.

3. I cannot quite believe how Peanut is already behaving like a teenager. She's reading like crazy most of the time around the house and a big help when it comes to managing her six year old brothers, except when she ignores them stealing Soya Katoris and except when she actually decides to turn into a six year old herself and then it's like managing triplets-gone-mad.

Here's some of the stuff you get to hear from her -

(After she finishes explaining to Papad that great can also be written as a g-r-8) '...And There's a Lot You Don't Know About Growing Up, Boy' - followed by a condescending pat on his head.

(After complaining about how she's getting tired following me around the mall, and hearing about the store we're going next) Oooh, Shopper's Stop? Great, I thought you'd NEVER stop!

I just took her to watch Fantastic Beasts and Where to Find Them, and what a movie it is. Please go ahead watch this one (Vijay and I also took the kids for 'Trolls' which was thoroughly enjoyable too but can't compare to this one).  This flick had the kind of special effects around Magic that would have lifted the Harry Potter series to the next level, in my opinion - and very good casting too. We had a debate about whether all of us should go but my six year old twins saw the trailer and opted to stay home themselves and just watch TV. Kids today are pretty smart. So it was just her and me because Vijay's decided to traipse around farms on the weekends, and we had a great time together. We were both less irritable without the men in the family around.

In fact, we were late for the movie, and usually getting late gets her goat - I hate being late for anything, and she particularly hates being late for movies. Uber wasn't working for some reason so barely with five minutes to spare, we rushed out of the house and managed to get an auto.

'There's nothing like an auto to spoil your hair.' She yelled over the roar of traffic as we sped along and I held on tightly to her.

'Yeah.' I agreed, pushing my hair out of my eyes.

'And we've never been this late for a movie before!'

'Yeah.' I had to admit. We barely had four minutes to spare although our guy was smartly snaking around traffic and making decent speed.

After a beat, she snuggled a little deeper into my arms and remarked cheerily 'This is fun.'

It took me a moment but I looked at my first born and realised something.

Posted by Yashodhara at 2:16 AM