But there's nothing to DO at Kasauli...


A couple of weeks ago, I took my first ever break away from the family ( in 8 years. Wow, I'm a Loser!). My friend Chhaya and I headed over to Dharampur to visit some very nice people who happen to be friends of my parents. Dharampur, in case you're wondering, is about 20 minutes away from Kasauli, which is quite the tourist destination.

It really tickled me when our well-meaning Family friends suggested we head over to Shimla, a few hours away, because 'There's nothing to DO at Kasauli.' First of all, we hadn't really gone over there to DO anything; quite the opposite, because especially for a slightly hyperactive person like me, even taking a break of this sort takes 8 years. You know what I mean. So the idea was to just chill.

Anyhow, we walked all over the place and thought it was absolutely beautiful. The nicest part about travelling with a friend like Chhaya is she is the type who carries tissues, hand-sanitizers and other random things with her so you never have to remember anything! ( Oh, your ears are uncomfortable because of the altitude? Try sucking on this Pan Pasand toffee....Seriously, dude, Pan Pasand from the 80's? Gimme!!)

So while I rarely do picture posts, they're the way to tell this story, and here goes! 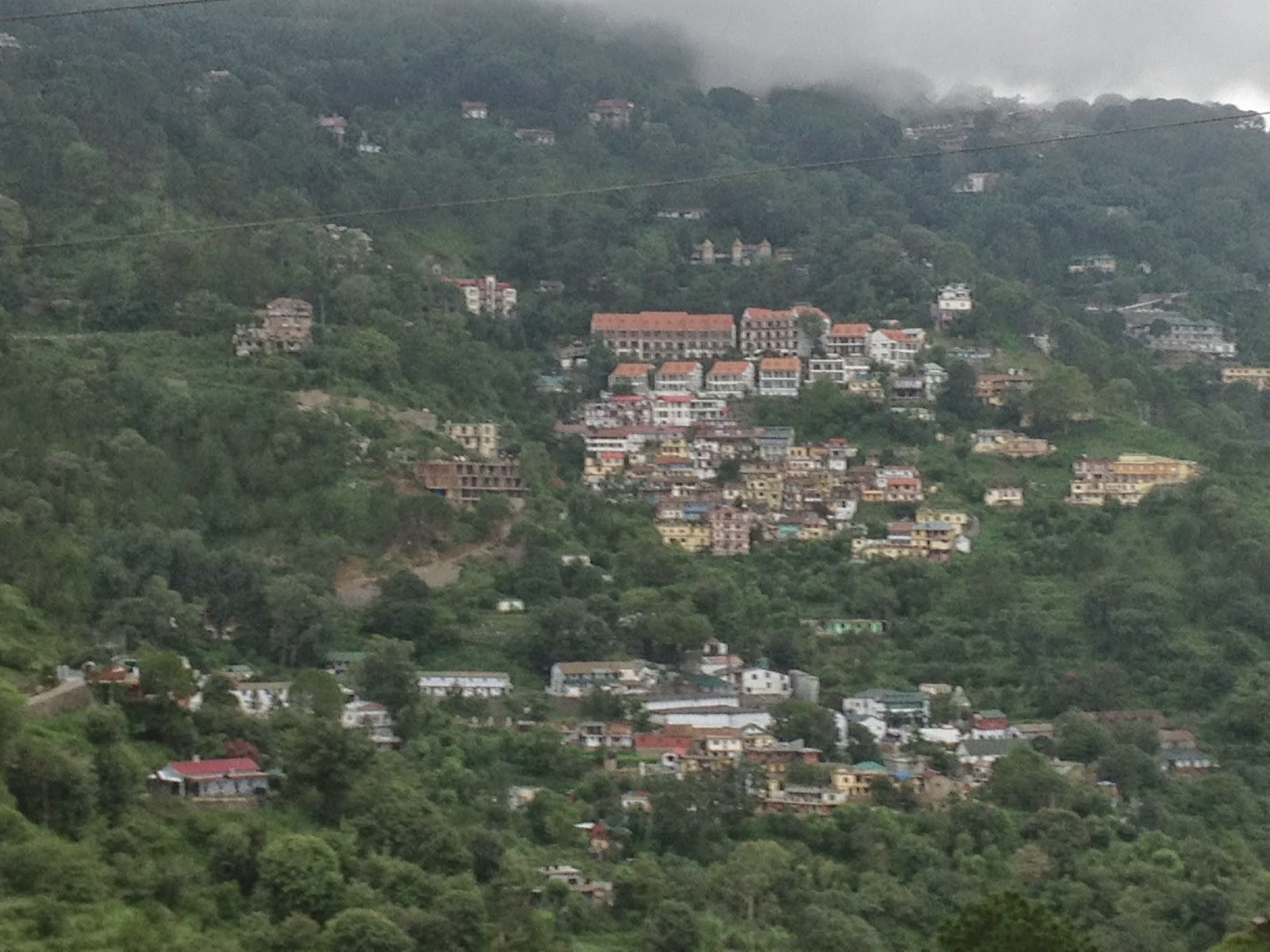 The beautiful drive. I think that cluster of red-roofs is actually perhaps Kasauli, but don't go by my knowledge of geography. 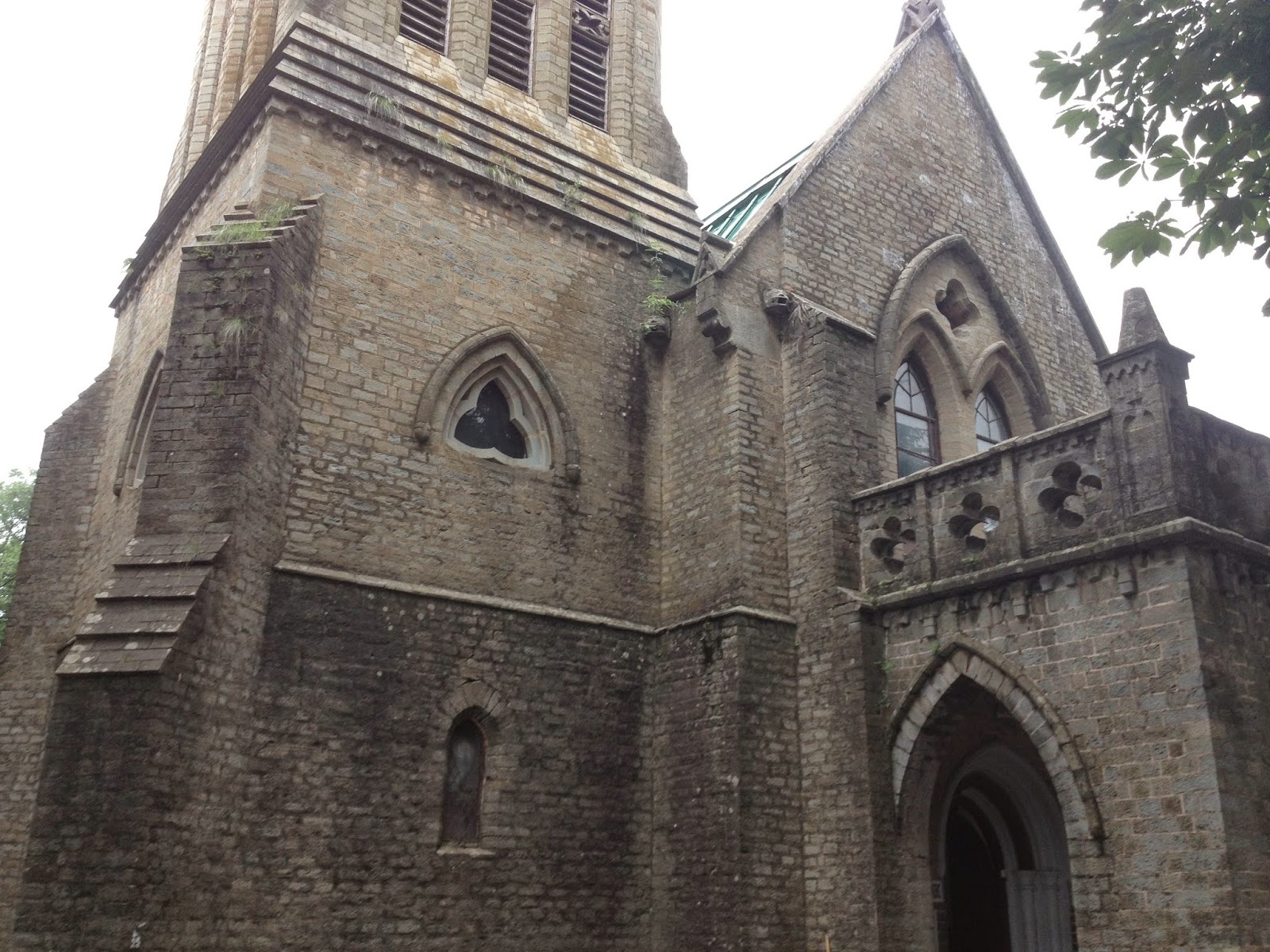 One of the landmarks of the place - the Church. It's quite small and peaceful. It rained so we ducked in there and it was quite nice, but could do with some renovation and maintenance work. Very picturesque nevertheless. 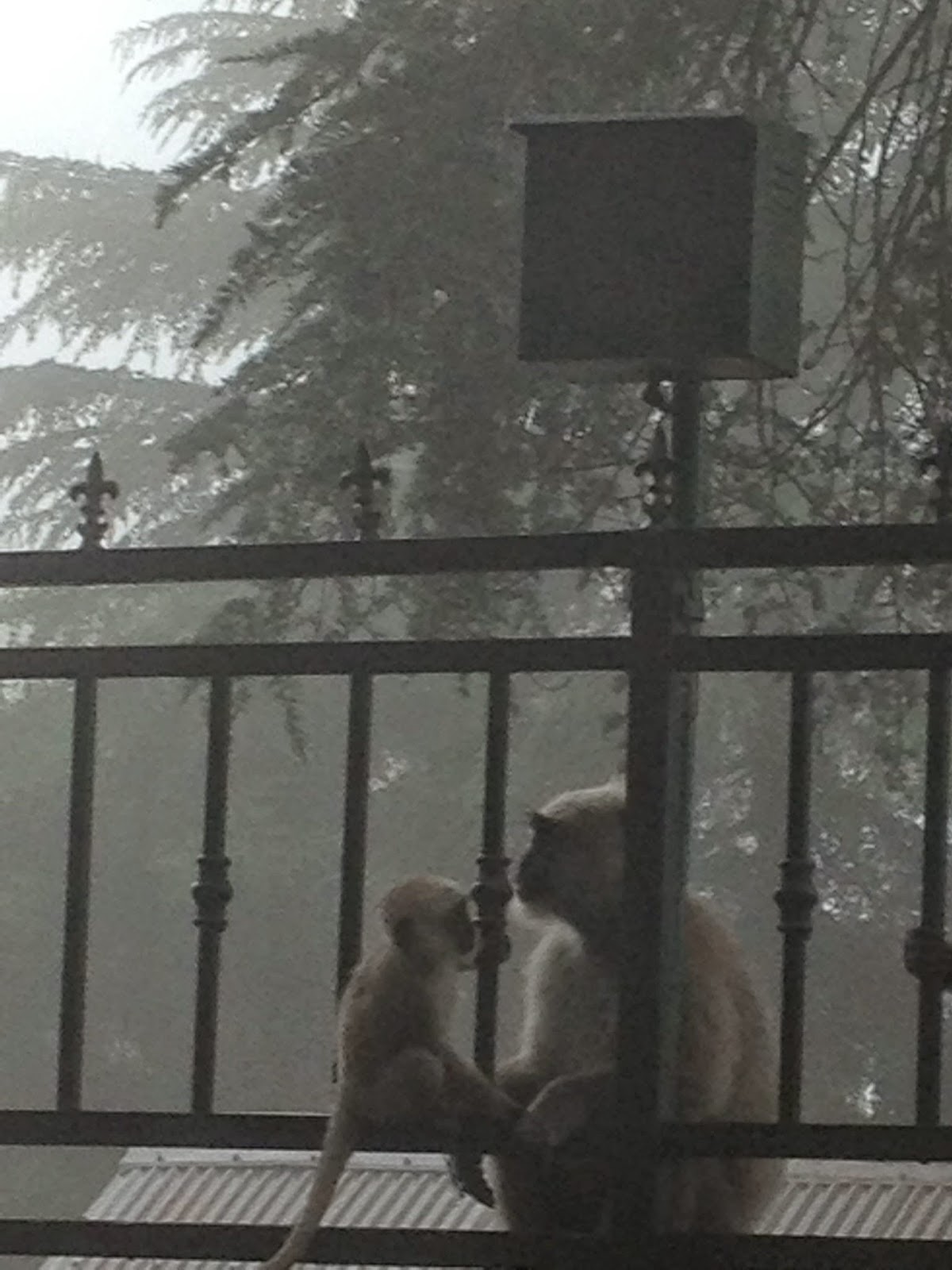 This mother with her baby really caught my fancy. The monkeys were real rogues overall, trying to snatch our Bhuttas. Luckily, the bhutta-lady knew just how to drive them away (Screaming: Besharam! Jaao, school ka time ho gaya!) 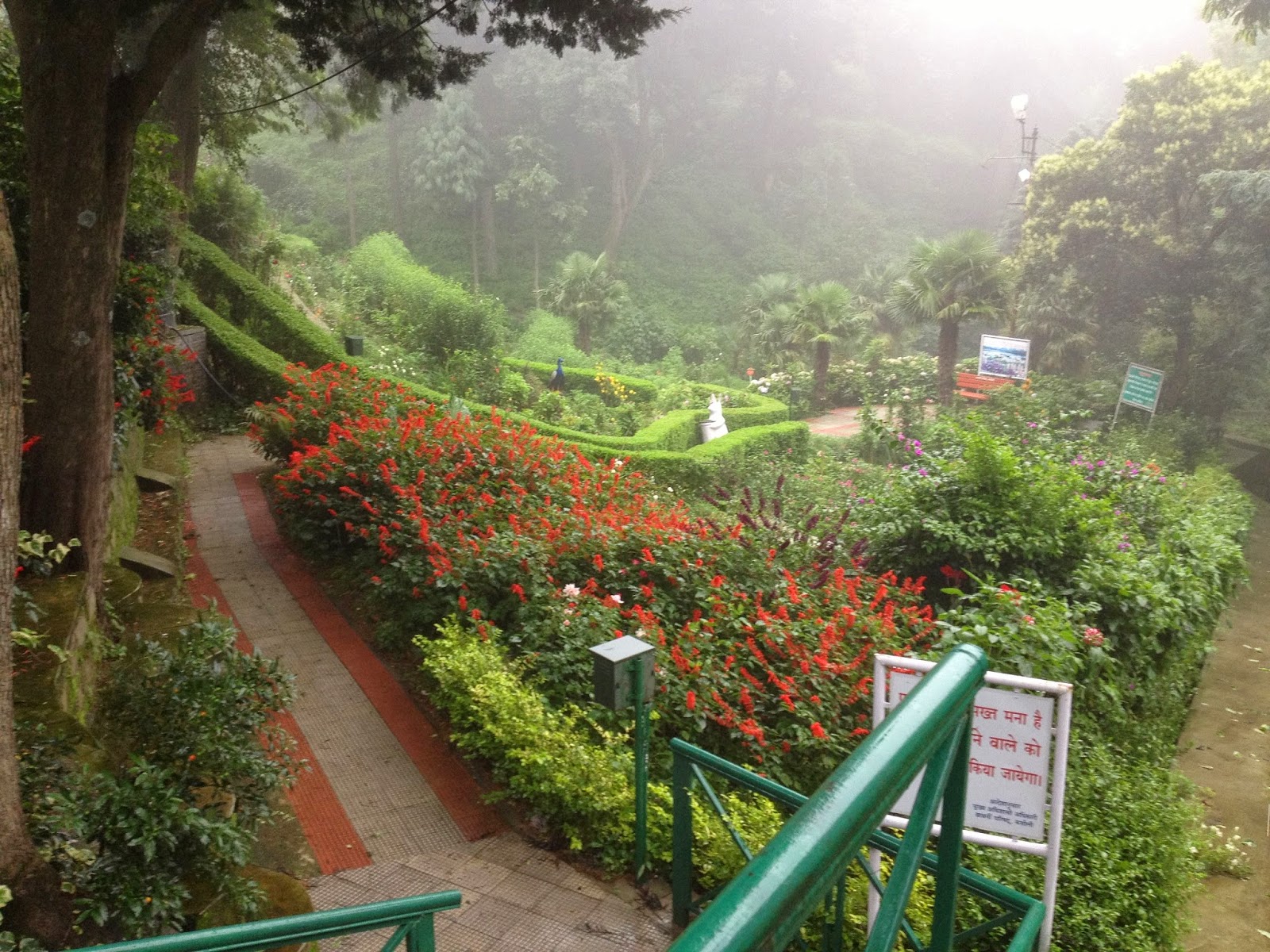 This was a lovely little forgotten surprise at the end of the Mall road - a beautifully and lovingly maintained flower garden which we almost missed. After we went in, a bunch of people wandered in after us, and I heard one man muttering 'Oh yeh private nahin hain.' 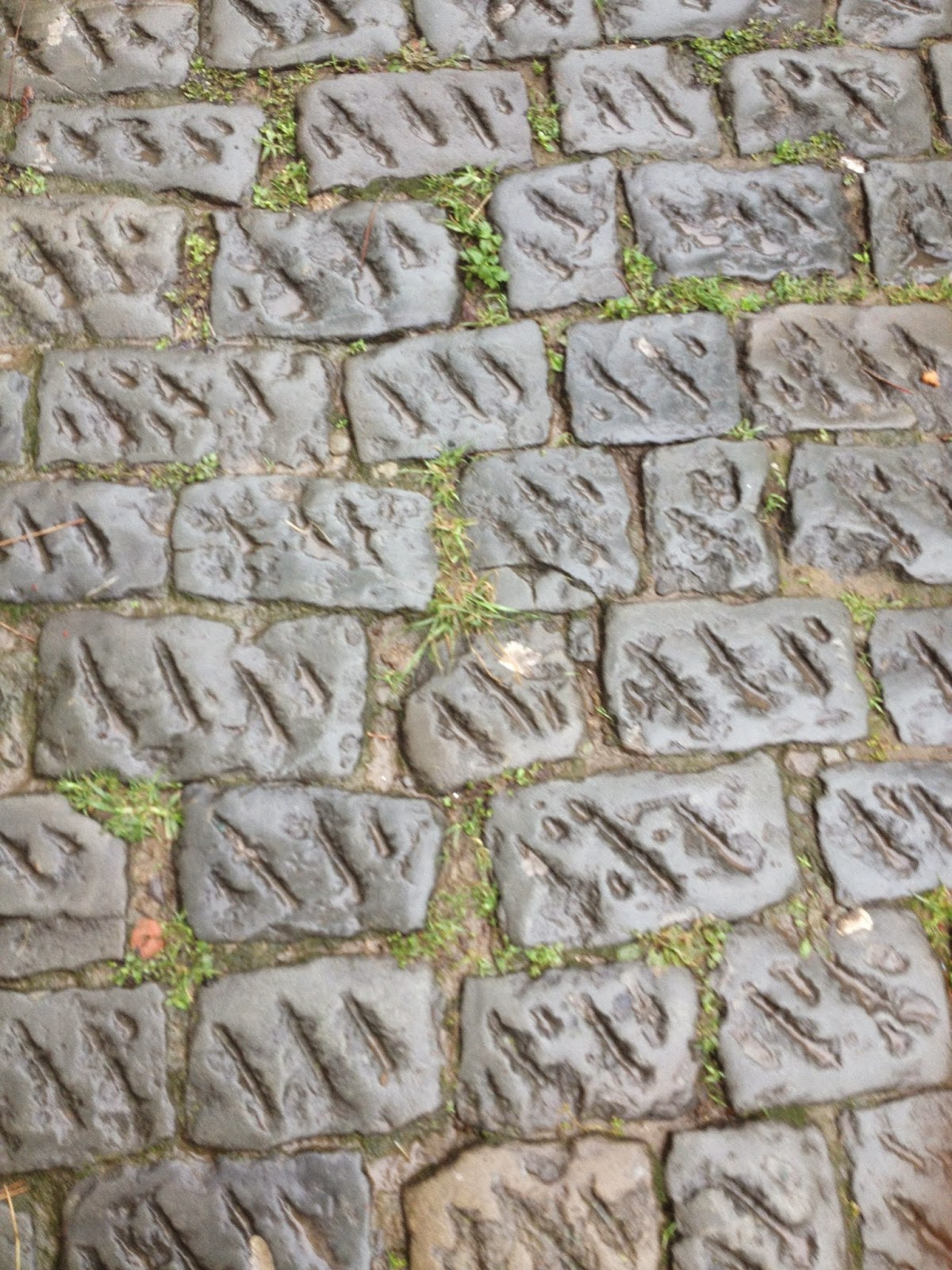 The cobbled stones leading to some of the houses down at the end of the market caught my fancy enough to take a picture. 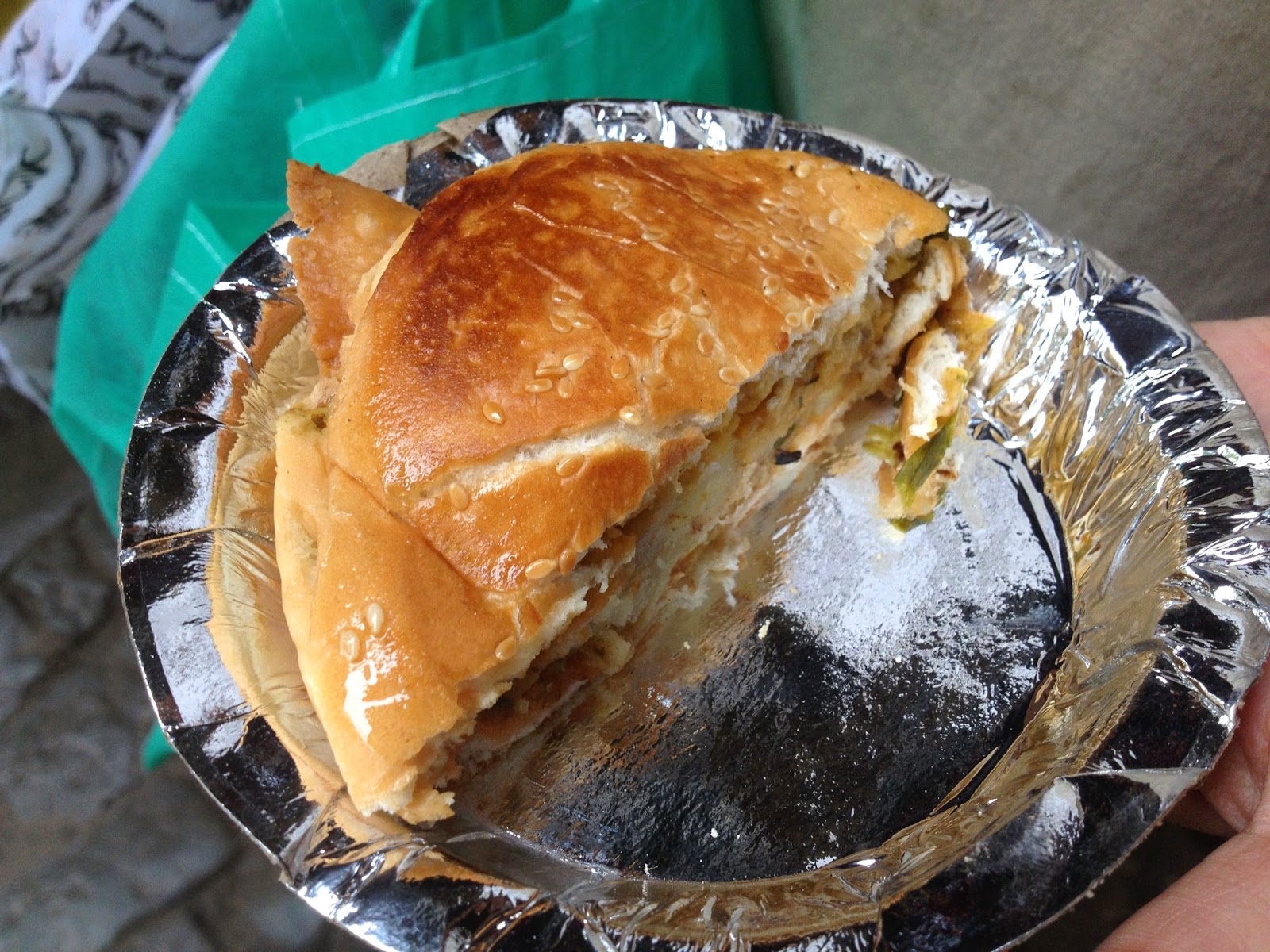 How could we possibly be in Kasauli and not have a Bun-samosa? It's the speciality of the place, and we had it from one of the oldest shops around so they're probably experts - an article by Khushwant Singh put up proudly near the entrance will identify it for you since I've forgotten the name of the joint.  The first day, Chhaya and I shared a bun-samosa because I was scared of falling sick, but nothing happened except for the fact that she complained the entire evening about how I had prevented her from enjoying a whole bun-samosa. Consequently we had to go back the next day and have a full bun-samosa each. It was worth it. The Gulab jamuns were to die for too - really awesome, the long ones without any elaichi-type-crap inside. 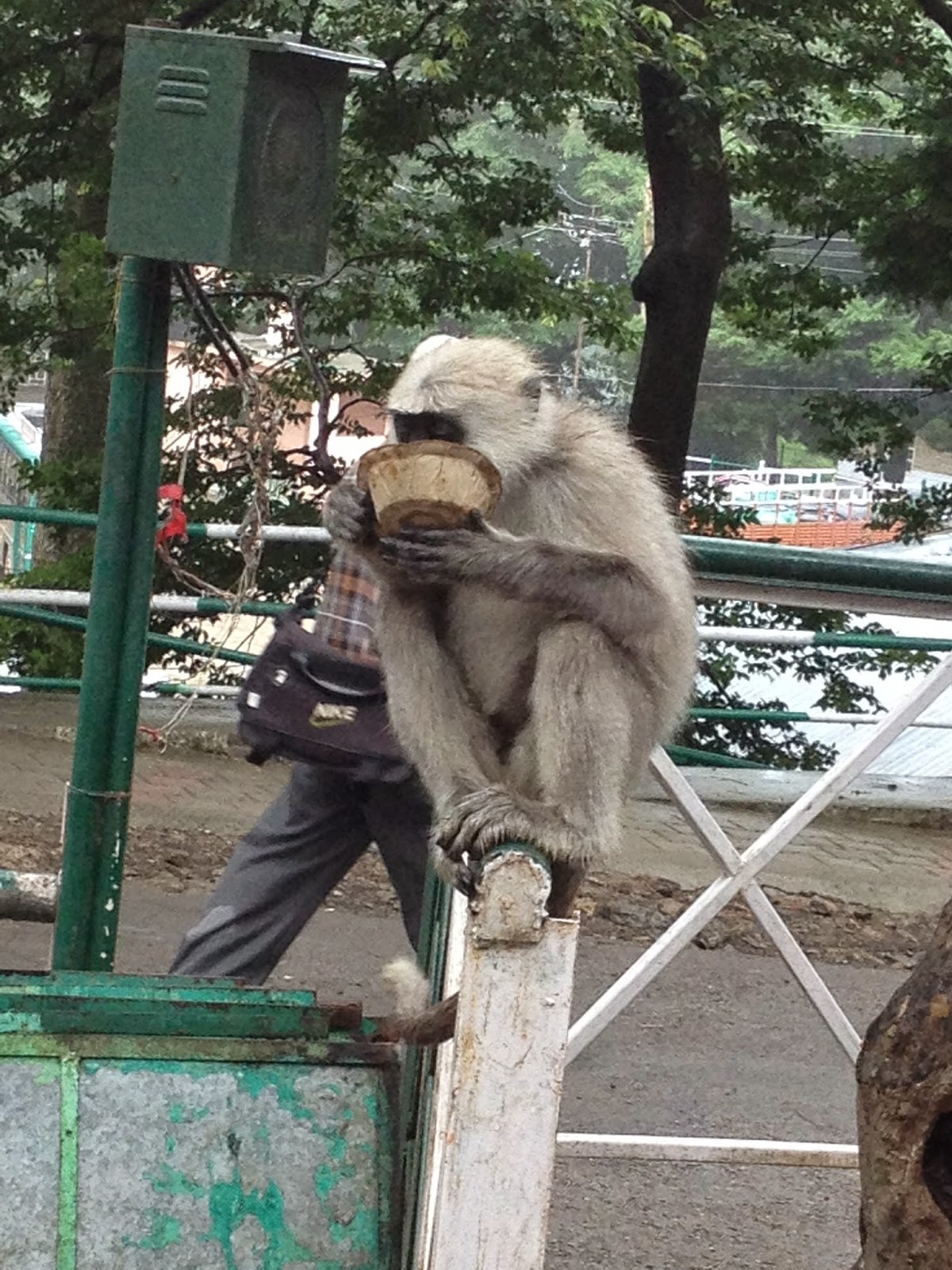 Can you tell I was really fascinated by the simians? 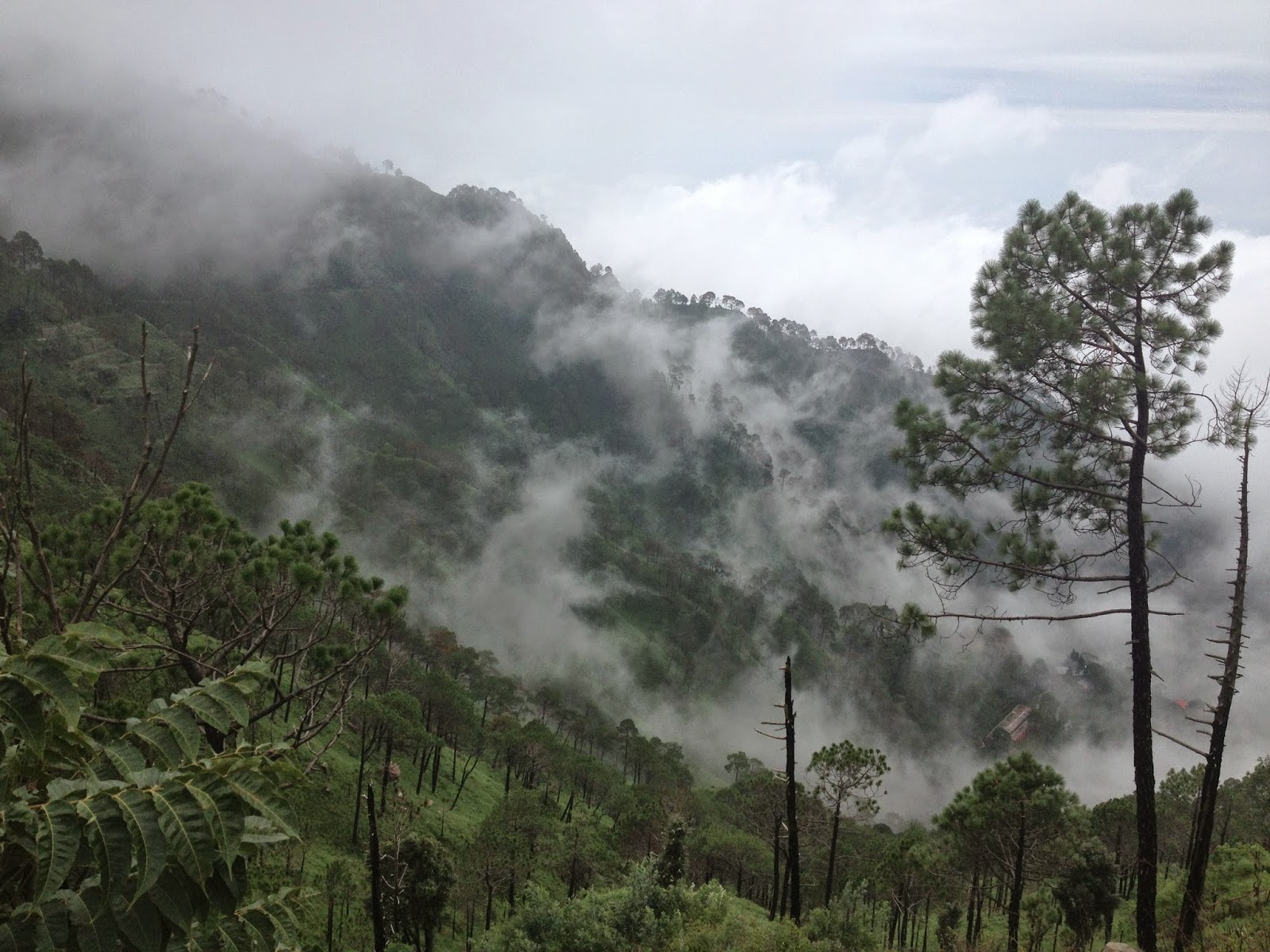 It wasn't the fog that we were occasionally caught up in - it was a cloud settling around us. Beautiful feeling. 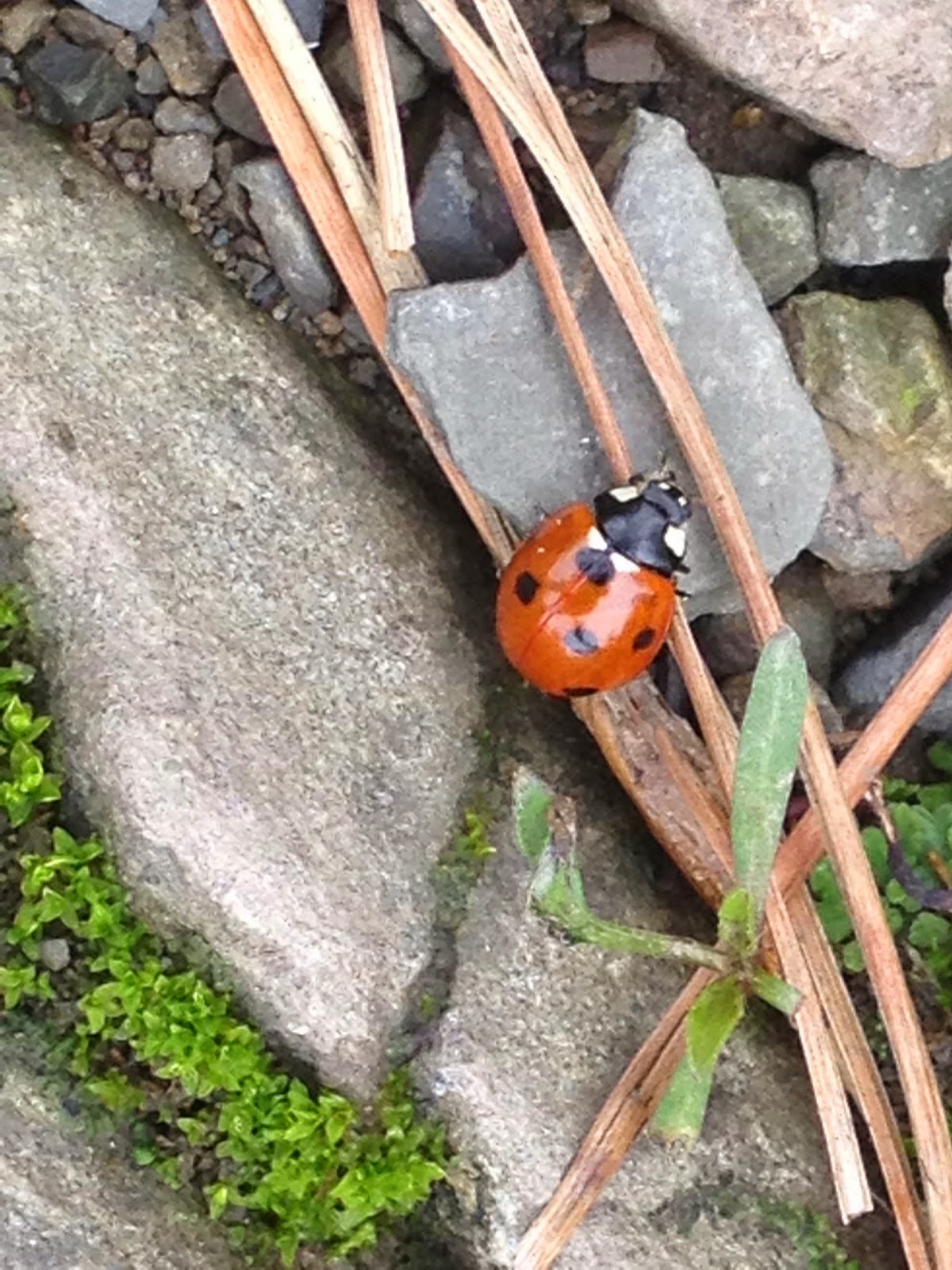 We went on a long trek to a place called Sunset Point - took us about 1.5 hours, but could have easily lasted longer if we had explored more of the place. By this time, however, I was feeling sick and it had nothing to do with the Bun-Samosas. 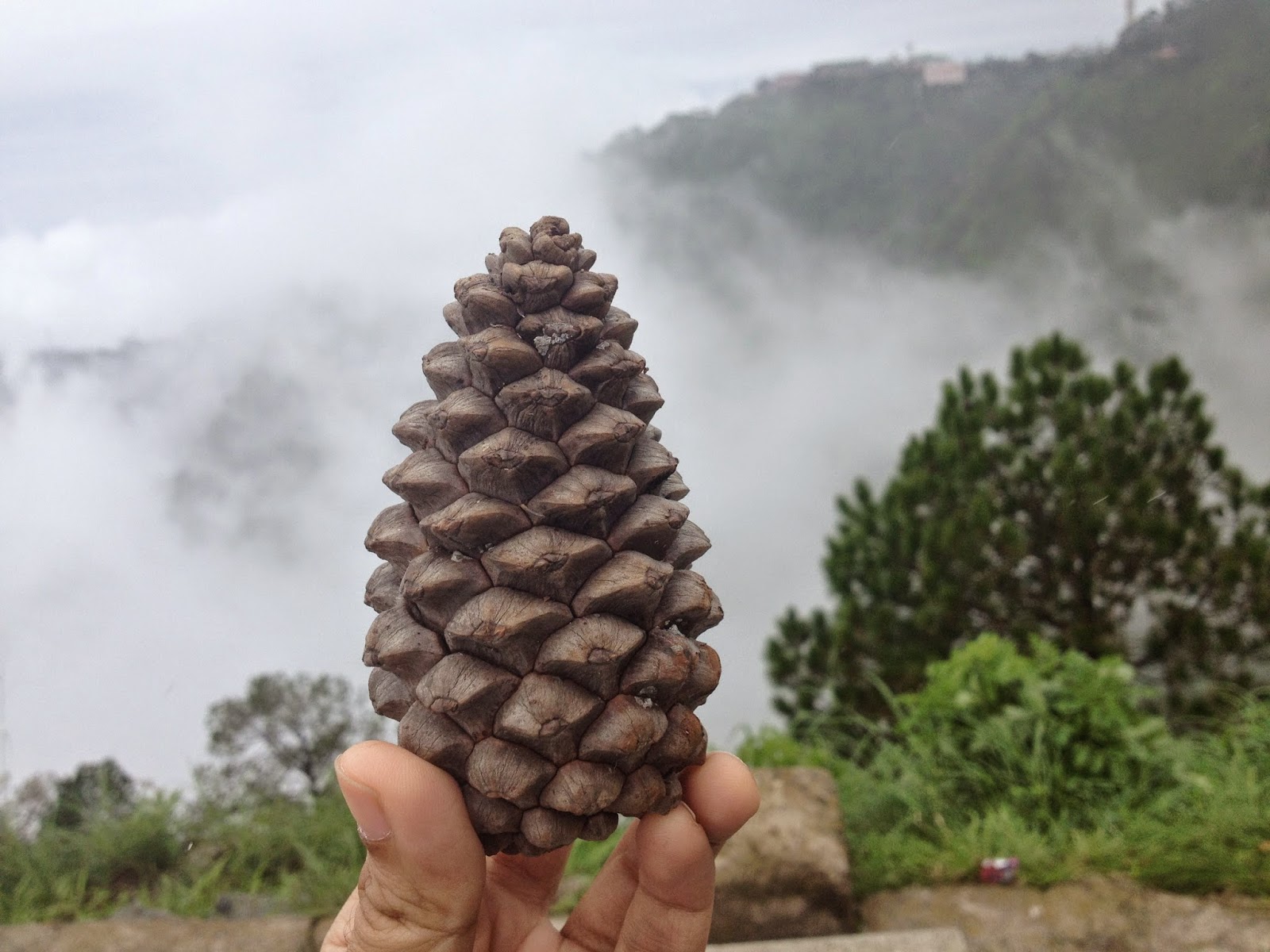 A pine cone. I find them almost as fascinating as monkeys. I brought it home for my daughter, who said 'Oh Wow' and then quietly threw it away. Sniff.

Also, we went to a place called Manki Point, which is also known as Monkey Point. There's a Hanuman Temple and you have to climb a few hundred meters to get there, which really isn't very easy, but took us all of 20 minutes, I'd say. We weren't allowed to take our phones into the place because it's in the middle of some Air Force Base. Apparently this is the point where Lord Hanuman's foot touched the ground as he went leaping and bounding to get the herb that would save Laxman. But again, like with my geography, don't go by my knowledge of History either. Social Studies - always my worst subject. But hey - I digress. We did a lot of shopping from the Mall Road, buying several Kullu Shawls (apparently made of Yak Wool, very warm) and Minchy's Wunder Wyne ( Chhaya chose Plum and I chose Apricot but she left her bottle at my place so I'm enjoying both alone at nights) and Amul Dark Chocolate ( very, very nice and only Rs.100 for a really large bar so I wish I'd bought more) and something called Red Chilli Chuk ( very, very spicy and adds that bit of fire to several of my meals) and loads of little toys and paraphernalia for the children, including three whips even. Vijay took one of these when he went jogging at night because he's afraid of being bitten by a stray dog. He's so charming.

The children couldn't understand why I had to go away for three whole days. 'Why can't Didu or Masi go with Chhaya Aunty?' They lamented. But I had to get away, and I'm glad I did. It was a beautiful holiday, three days of doing nothing and everything with a nice companion and our wonderful, warm, large-hearted hosts.

In short. Expect nothing... and go to Kasauli. You won't regret it.
Posted by Yashodhara at 6:40 AM