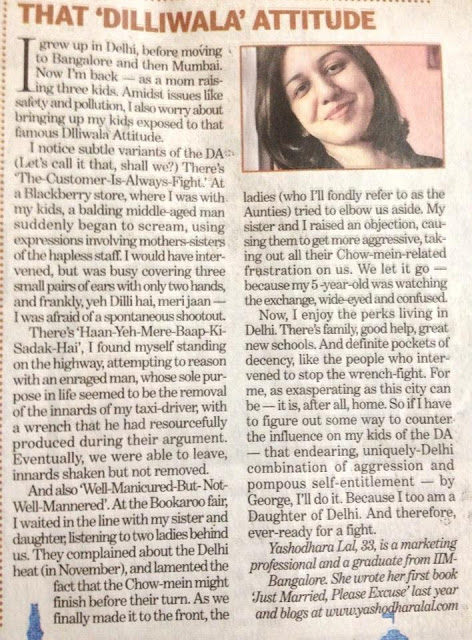 This was my article in a feature called 'Moms and the City' in the Hindustan Times, Saturday, May 11th. The feature also had articles by three other lovely ladies that I know!

Below is the unedited version of my bit on 'That Famous Delhi Attitude', which I personally liked better in its longer avatar ;)

''I lived for twenty years in Delhi, before moving to mild-mannered Bangalore, and then to no-nonsense Mumbai. And now, I find myself back here as a mom, and attempting to raise three kids, to boot. Of course, it’s tough enough being a mom by itself, and some things about Delhi don’t help. Including the issue of kids’ safety and what reports ominously declare about the pollution levels. But I also worry about a different kind of pollution – bringing up my kids exposed full blast to that famous Dlliwala Attitude.

I notice the subtle variants of the D.A. (let’s call it the D.A., shall we? Abbreviations are almost always cool.). There’s ‘The-Customer-is-always-Fight.’ I was waiting with my kids at a rather understaffed Blackberry store. Suddenly, a balding middle-aged man started screaming about his phone –full of self-righteous agitation, he made his dissatisfaction amply clear, using the choicest of the expressions involving mothers and sisters of the hapless store staff. I would have intervened, but I was busy trying to cover three small pairs of ears with only two hands, and frankly – yeh Dilli hai, meri jaan - so I was mildly afraid and half-expecting a spontaneous shootout.

Then there’s ‘Haan-Yeh-Mere-Baap-ki-Sadak-hai’, more boringly called Road Rage. I found myself standing on the highway, attempting to reason with an enraged man, whose sole goal in life seemed to be the removal of the innards of my taxi-driver, with a wrench that he had rather resourcefully produced during their heated argument. Eventually, we were able to leave, innards shaken but not removed. I was particularly glad that I was travelling minus the kids that day, shuddering to think about their witnessing this.

The ever-ready-for-a-fight attitude is not limited to uncouth men who spout mother-sister gaalis, but sometimes the mother-sisters themselves, in the variant ‘Well-Manicured-but-not-Well-Mannered’. At the lovely Bookaroo fair, I was in the line for snacks with my daughter and my sister, listening with mild amusement to the ranting of two ladies behind us. They complained about the Delhi heat (this was November), the overall terrible management of the fair, and lamented the fact that the Chow-mein would finish by the time they reached the front. As we finally made it for our turn to order, the ladies (who I’ll fondly refer to as The Aunties) tried to elbow us aside. My sister and I, not ones to take things lying down, raised an objection, and this caused the Aunties to get even more aggressive, taking out all their Chow-mein-related frustration on us. Eventually, we had to swallow our anger and let it go, largely because my 5-year old daughter was watching the exchange, wide-eyed and confused.

Now, I do personally see plenty of perks of living in Delhi. We have family here, and good help for the kids; the newer schools are great, and our children love going there, which is more than I can say for myself as a kid.  There are definite pockets of decency, such as the nice people who intervened to stop the wrench-fight, including a bulky Sardarji whom I never got to thank properly in all the hullaballoo. For me, for all that Delhi is and as exasperating as it can be – it is home.

So I’ve decided that if I have to figure out a way to counter the influence on my kids of that D.A –the endearing, uniquely-Delhi combination of aggression and pompous self-entitlement –by George, I’ll do it.

Because after all -  I too am a Daughter of Delhi -and therefore, ever-ready for fight.''
Posted by Yashodhara at 10:48 AM