At The Happy School

At the beginning of my sabbatical in June of last year, I was very listless - I wanted to do a bunch of things, and amongst them was some form of Volunteer work. The problem I've had with this sort of thing is actually the fact that I've never been able to sustain it before - but thankfully, the one little thing that I have managed to consistently do is work with the kids at a place called the Happy School - for almost a year.

The Happy School is a school in DLF Phase 1, Gurgaon for underprivileged kids - it's run by a wonderful lady called Mrs. Kamal Capoor. She's been doing this for a number of years and it's a really fabulous effort to give these kids an education - and more than that, a warm and happy environment for development and play.

I've been helping a bunch of the smaller kids in Class 1- and now that they've moved, to Class 2 - with spoken English on Saturdays. Now, the fact is that this is just about forty five minutes a week. I often wondered how much it was really helping.

It's not been easy going, either. I'm not really a teacher, after all. Still, I'd done so many nursery rhymes, stories, songs and so on with my children that the content wasn't really a problem. But getting twenty-thirty kids to actually stop bouncing off the walls on a Saturday has never been easy. Plus, they figured a long time back that I'm not one of the tough regular teachers - so since I'm a soft touch ( and no other set of people in the world would probably describe me like that), they kind of take advantage of it all the time.

Often I'd find myself chickening out - I'd wake up on a Saturday and every bone in my body would resist the thought of getting up, getting ready and leave the house to go to a bunch of screaming kids, when I didn't even know if it was really any use to them. After all, school was off on second saturdays, so it was really at best 3 times a month, not even 4.

But then something changed - I started taking my 5 year old Peanut with me to Happy School. She loved getting ready and going out with me, clutching her books and would chat with me about 'what can we teach them today?' - and indeed, I realized over a period of time that this was my Teaching Assistant and a very good one - not only was she providing all sorts of new, lovely rhymes that she learnt at her own school -but with her uncanny memory, she was able to help me recall all the material we had covered in the previous week or two so that we were able to plan our class more systematically - reinforcing the old stuff and introducing new stuff at a reasonable pace.

I was invited to the Annual Day a few months ago, but I didn't end up going. I figured, if I wasn't going to teach, what was the point of going. Big mistake, as I found out later from Mrs. Capoor. It turned out the students of Class 1 performed 3 items for Annual Day - and they were all the songs and poems that I had taught them! So much for thinking that it wasn't really registering.

So now, even though I'm back at work, I go with renewed confidence to the school every Saturday. I had a chat with Mrs.Capoor who told me that she hears the class from her own room and they sound like they're having so much fun. This is true. I've begun to know the kids much better - tall, quiet Chandini who has a flair for drawing and and tiny little bucktoothed Prince who's the naughtiest and most lovable of the lot. I'm even planning to teach them some sort of dance or maybe get them to act in a play for the next Annual Day.

In fact, over the last couple of Saturdays, Pickle and Papad have also been accompanying us. Much mystified in the beginning about what was going on, they soon adjusted to the fact that their mother appears to be a Ma'am. They hang around the classroom with me and watch, participating occasionally in the nursery rhymes or generally adding to the considerable chaos that is there.

Today, as I walked towards the class, someone shouted 'Ma'am Aa gayi! Yayyyy!' and a chorus of Yays went up. I walked in with the kids and they said 'Hi...ma'aaam'. I said to them 'How are you?' and the deafening 'Just Fine!' with each kid giving me two thumbs up had me laughing as usual.

I've become braver - earlier I used to teach only one section in class 1, but now I get two sections to pile into one so that all the kids in Class 2 learn something new. I'm smarter too - I figured that the songs and the poems engage them the most because they love it - the stories I tell have to be carefully planned with lots of animation and playacting and emotion from me, for it to hold everyone's attention. And I have to cut back on the little gifts because they distract the kids and make them act up. ( Although I don't regret carrying a packet of Mango churan golis into the class today and distributing them to the children who were 'behaving well'. Yes, in the end I had to pretty much drop the packet and flee for my life, but it looked like it was working until everyone started to step on each other in their attempt to prove how well-behaved they were.)

On Christmas, I played Santa with them - getting them to write a letter about what they wanted from Santa. Their written English really isn't very good but they painstakingly stated their wishes on scraps of paper which I collected - and then Peanut and me went shopping with our list. About 40 items were purchased, including 'Cakes' and 'Doll' and 'Car' and 'Toffee' ( I was touched at how many kids just wanted a Toffee for Christmas - so they got full toffee packets). On the day of the distribution, Vijay and the kids came along to help me hand them out - it was nice although there was a minor scuffle when Papad decided the little white car belonged to him and not to young Prince.

So today, I looked around at one point towards the end of the class. The kids were singing 'The Wheels on the Bus' with full gusto, angling for an extra Mango Churan. Some of the bigger boys had lost interest and were trying to get my maid Rinki to take a picture on her phone of them along with Pickle. Pickle was protesting and scratching their faces, and Papad went over to scold the boys for troubling his brother. Peanut was sitting at the teacher's desk peering at the story 'A Friend for Flash' that I had just acted out for the class. The regular class teacher was yelling at a little boy, telling him to stop stamping on the foot of the little girl next to him while singing.

It was actually complete madness.

The kind that makes a person ludicrously happy. 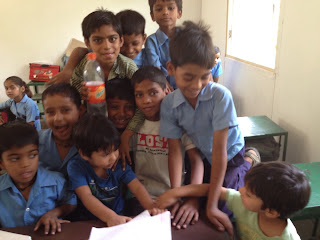 Papad rescues Pickle. The boys don't mind his scolding, or the 'Katti' he gave them repeatedly afterwards 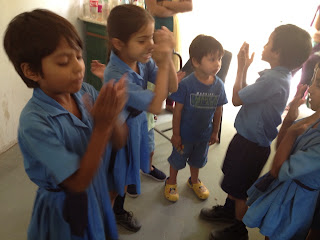 These two girls insisted on performing Wheels on the Bus themselves to prove how well they knew. They were pretty good.

P.S - Mrs. Capoor is looking for volunteers to teach a new bunch of kids - they are of a wide age range but haven't had access to even the most basic of education. Ideally, Mondays-Fridays. There are various other ways to help the school, and you can decide how you want to get involved. Do write to her at kamalcapoor at yahoo dot com if you want to help out, or get in touch with me at yashodhara dot lal at gmail dot com.  And yes check out the rather outdated website - she needs someone to help with that as well - at TheHappySchool.in

Posted by Yashodhara at 4:11 AM