Is it really time already?

Earlier this year I went on a sabbatical, because of various reasons. Focussing on the family and doing justice to launching my first book were the main stated objectives.
As with anything new, it was hard to adjust to not going to work - in fact, with alarming regularity I found myself sitting in the office, just because I found the environment comfortable to work in. Slowly, things started to change.
In July, the twins started playschool, and I found that I had a few hours to myself at home - so I began to write then. Within a couple of months, my second book was completed. It's out next year, about August/September. I'm still finalizing the draft I'm to hand over to the Editors at HarperCollins.
There's just so much that's happened in the last few months. It's helped me figure out a lot of things - such as the fact that I don't want to be a full-time writer; or a full-time mom - but I definitely want more time to be doing these things than the usual corporate job allows me. So as of now, I'm considering going back to work on some sort of a project basis. That's a start, right? Knowing what you don't want. Ha ha.
It's been interesting, being able to do some things I never would have had the time to do earlier - park time with the kids; taking Peanut and friends to Mindcafe to have a blast with the games there; organizing activities at this new cafe that's opened up nearby, including getting Zumba started up there ( now I don't have to travel for it, and it's a big hit with the residents!), organizing Christmas Carols to be sung by the little neighbourhood kids on the 25th, and so on.
I also got to spend loads of time with my grandmother, making trips to Noida about 3 days a week to cheer her up. We moved house and the new place is organized so much better, so that's worked out well.
Many relationship issues rose to the surface over the last few months, so a lot of clarity emerged there as well - who's really important, who's really going to be there. I've also done a lot of very useful reading, although I didn't get to even touch upon the Fiction list that I had made.
If I started trying to list all the various things I've done for the first time during my sabbatical, it would easily run into over 40 things. But right now, I'm just at that stage where I'm realizing that while the sabbatical is almost over, there are still more questions than answers about what I'm going to be when I grow up.
Still, I have a feeling I'm beginning to ask myself better questions. And for that alone. Worth it. So worth it.

Happy New Year to all of you!

P.S - my most 'random sabbatical indulgence'. Coins from my (paternal, late) grandma's collection made into earrings. They look quite cool, actually! 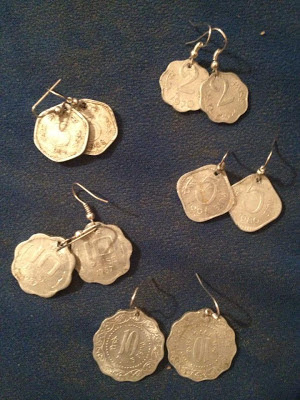 Posted by Yashodhara at 8:32 PM