Okay, so now I have just a couple of months left before I intend to take on some form of work project. Which means I really need to figure out where my time is going to go for the remaining short while of my very precious sabbatical. And this week has been instrumental in many ways.

* To start with, I've had a tough time earlier this week with a personal issue; but it's taught me a lot about what - and who- is really important in my life. I'm amazed *again* about how things that seem really harsh end up being the best things that could possibly happen to you. In any case, I've got a lot more clarity on my priorities. And as Ms. Wannabe Superwoman Par Supreme, that's exactly what I needed.

*I met my wonderful Chief Editor yesterday for a long-overdue coffee - and we talked about my second book. Her insight and 'gentle' sharpness always takes me by surprise - and she's one of the primary reasons I love working with HarperCollins.
So she really likes the book - says the writing looks effortless and has gone up a few notches ( although it was more difficult for me to write this, for sure). This one is not the sequel to Just Married, Please Excuse - it's my first shot at real fiction - and that too with a male character as the main protagonist - and she had some really great comments about it. My sister is the only person apart from her who'd read the first draft, so with her inputs, I sent her a much cleaner version - it still needs work, but as she puts it ''the majority of it is in place'' - having said that, the bits that she has pointed out are crucial loopholes in the story. So that pretty much gives me my focus project for the next couple of months.

In short:
* I'm putting work on ''Still Married, Thank You'' on indefinite hold. This was the sequel to JMPE - there's no rush anyway, because my second book is planned for release in 2013 and ''Still Married'' (note - it's a working title, but I think it works) - will come out in 2014  - if I manage to write it next year. And I've decided there's no rush on the writing.
* I've also realized thanks to the last few months that writing is definitely not something I will be devoting my life to - it will be an important activity, but not my full time profession. That clarity is cemented this week.
* I've dropped my guitar classes and Zumba so that makes some more space - so am just spending as much time as possible with my family - especially my grandma and kids over the next few weeks.
* There's of course, the 'Happy School' where I'm teaching spoken english on Saturdays - that's the only outside activity I want to continue. My daughter loves coming with me, and frankly, I can't manage very well without my little teaching assistant who always reminds me which stories and rhymes we did the previous week, and suggests new ones which she has learnt in her own school.

She also seems to be taking the 'teaching' bit to heart and loves tutoring our maid ''helping Didi with her homework'' as she puts it. That's the one thing I am so glad about - I managed to find an angelic lady to give this very bright girl who works in our home lessons in English and Math - something that my maid is totally delighted by and works very hard at. So this is the other thing I've managed to do for my maids, apart from opening another one's bank account. Next project - gas connection for one.

*Also, we're shifting house, and we're moving to the ground floor and I think it's great because it's safer than the third floor for my frisky little boys and plus, now they get to drop all their toys and make a ruckus and no one will get disturbed!
* Finally, I've still got some commitments to do with writing; including mentoring a contest on Indiblogger, and some other things.

So, yes, there's still much to do be done. But I can safely say. It's been more than worth it, this sabbatical thingy.

If for nothing else, then this moment alone. 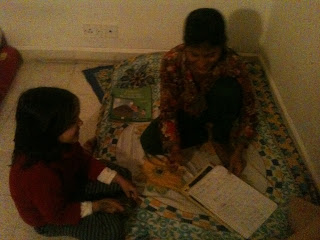 Posted by Yashodhara at 9:08 PM