It's a Twin Thing


Occasionally over the last few weeks, I've been taking out Pickle and Papad for a walk in the little park inside our complex.
I was gifted the nicest twin stroller by a complete stranger - basically, a lady in the park has a friend whose twins are now grown up. The stroller she had used for them was still in good shape and she didn't know what to do with it - so when the park-lady mentioned it to her, she was only too happy to offer this stroller and I was only too happy to accept.
The thing is that there is no concept of a peaceful walk with the twins. Everybody wants to stop and look at them and ask questions about whether they are identical, how old they are, and so on. The little kids and old aunties alike are equally fascinated by them.
I must say that as a mother it is gratifying to hear things like 'They are sooo cute', and 'How Gorgeous are they'...and so on. Especially since the first few weeks I was hearing comments like 'alien' and 'rats' - and the fact is, they were very alien-and-rat-like in those days.
But now, they are growing well, both over 5 kgs and chubby with the fattest little dimpled thighs and cheeks you ever did see. They are well within the normal range, and their difficult start in the nursery seems to have done them no harm, but in fact has made them much easier to deal with than Peanut ever was. They don't cry or fuss even half as much as she did and they are in general very peaceful little creatures - sleeping, playing by themselves, feeding, burping loudly, pooping and doing all the things that little babies do.
Of course, they are not sleeping through the night but I'm convinced no kid ever does! They wake up every couple of hours for a feed even now, although they are almost 3 months old. I wake up dutifully to feed them and they fall back asleep after a solid burp or two. The fact that there are two of them does make it a fairly continuous process through the night but it bothers me surprisingly little. After the last 3 months being the way they were, little things actually bother me a whole lot less!
Anyway, no one is happier when I bring them to the park than Peanut. She is typically playing football with the K or a friend when I land up with them, and she runs squealing all the way across the park and insists on pushing the stroller with me. She guards them jealously and gives the evil eye to the other tiny girls who bend over too close and -gasp-have the temerity to kiss them. I haven't learnt the art of telling little girls not to do that, despite the risk of infection - they do it so sweetly.
One new lady at the park saw me strolling them around and asked me a couple of questions about them including 'How do you manage?'. There is never an answer to that question so I just laughed and told her that I, in fact, have one more child - and pointed out little Peanut running around in the distance.
Instead of saying anything about how difficult it must be, all the woman said was 'Wow! You are one blessed lady!'.
And I thought 'Yes Ma'am. That I am!' 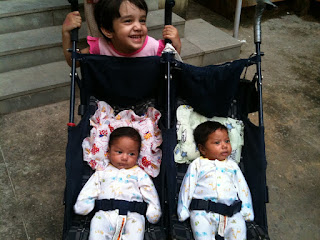 This is one of those Kala Tika posts, isn't it! All Jinxes, Go Away! Go on now - Shoo!
Posted by Yashodhara at 3:53 AM