I went to yesterday's Gotye concert at the Blue Frog.
Excited that I'd managed tickets at the last moment thanks to some very good and resourceful friends. Sheepish that I was just like one of those yuppies who've pretty much heard like two or three of his songs.

It blew me away.

He is stunning in almost every way. As a musician, he is incredibly versatile. I lost count of the number of instruments he played...mostly percussion, but plenty of other things as well, many of them being instruments that I can't even name. The band members were all fantastic, but I could pretty much keep my eyes only on Gotye throughout.

You know how some people are good in the recording studio but actually can't sing to save their lives and go all over the place on stage, particularly with vocals? This guy was unbelievable - not a note out of tone, not a missed beat, amazing energy - and an endearing personality, liberal doses of humour in between song and ...so much grace.

My friend whispered into my ear, looking up in awe ''He looks like Jesus.''
I nodded mutely, thinking Jesus wasn't Hot like this, dude.

I've been to a few concerts - not that many, I guess - INXS, Joe Satriani, Roxette, Elton John and some others I'm forgetting now - and I've actually enjoyed each one of them. But nothing comes close to this man and his crew.

I also lost the sheepishness about never having really heard much of his music beyond the most popular songs. Each song was a discovery in itself and I can't think of a better way to be introduced to his music than seeing him perform all those songs live - showcasing that the popular songs were only the tip of the iceberg as far as he's concerned. I don't think I can describe his music at all, actually. Words fail me, apart from saying that it's beautiful.

Blue Frog was a fairly nice venue - the only thing that really annoyed me was when people in the back ignored Gotye's plea to keep the chatter down for some of the quieter songs because it was disturbing. A bunch of people (sounded like some very drunk and desperate women) were merrily chatting and laughing away and I found myself wishing they'd found some other venue to haunt for the night, since their agenda clearly was NOT the music. But despite this, most of the people there seemed to be listening and truly enjoying the music, and that always makes for a great atmosphere. 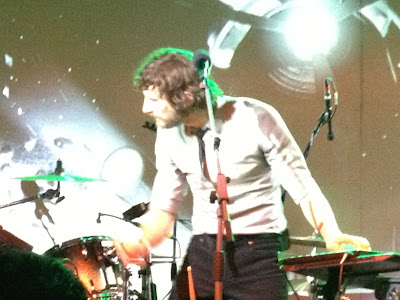