Last week, before Diwali, Vijay and I went to meet Peanut's teachers at her playschool, for our very first PTA Meeting.

First of all, of course, we got ready at the last possible minute and I was getting extremely agitated. Leaving a bewildered Peanut behind, we rushed off and landed up just in the nick of time. We waited around, smiling blandly at the other parents and were soon called in to meet her teachers - Neena and Niti.

Neena did most of the talking, and I found myself warming up to her even more than before - she spoke in a very affectionate way about Peanut and told us about the developments she and Niti had observed in the past few weeks.

This, therefore, is the public image of Peanut:

* She is a very sweet, tender, gentle and well-disciplined child
(Really? I think of the temper tantrums at home)

* She is very assiduous about her work and always puts back her things when asked to do so.
( Her favorite game at home is throwing my books of the shelves, stepping all over them gingerly and pretending to be deaf when I ask her to help me pick them up)

* She does not really communicate verbally, but through gestures it is clear she absorbs everything.
( When Vijay and I are at home, Peanut is the only one who talks. If we try, she resorts to varying levels of the word 'Aaaaa' in order to get us to pay attention to her, finally resulting in screaming if we continue to try and have a conversation).

*She shares an unspoken bond with two kids called Karan and Khushi, and they often are observed doing their activities together and sharing things.
( I am delighted at this. Vijay spends the next few days in deep suspicion, asking Peanut at sudden intervals in an ingratiating manner 'Beta, Karan kaun hai?)

* She is the darling of the class ( wonder if they say that to all parents...nah!) - and is so adorable that all the kids often jump all over her, especially during dance sessions. The teachers are very fond of her and protect her from the rowdier boys ( I could feel Vijay bristling beside me) - and the teachers' special name for her is Tinkerbell.
(This I did not know. And when I went home later and called her Tinkerbell, she got a very special kind of shy smile - when I asked her who calls her that, she said 'Neenaanty'. )

* I was very touched by the description of how they suddenly one day observed her saying her rhymes along with the other kids - Neena says she saw her and held her breath, and gripped Niti's arm and pointed and they both stared in silent delight at her mouthing all the words correctly. ( This kind of excitement really amazed me - I always thought I was the only one who took a real interest in Peanut's little achievements but their delight seemed genuine. I like these people. And yes, Peanut says all sorts of rhymes at home and also sings Andy Pandy and the Teletubbies and the Boogie Beebies theme songs with me)

Anyway, that's about that. I leave you with a couple of older pictures from a school function. In the first one, she's the one in the audience who can't sit still. In the second, she's on stage doing 'Row Row...' 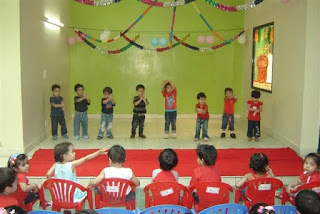 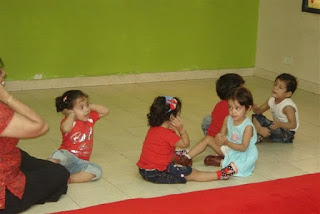 Posted by Yashodhara at 7:29 PM