It's not often that I talk about books on my blog (yes, yes, I know, but my own books don't count here!)... but Paul Kalanithi's 'When Breath Becomes Air' is one that took my breath away. There's a pun in there somewhere, but you must excuse me. It's a rather facetious way to start a post about a really great book with a message of profound importance. 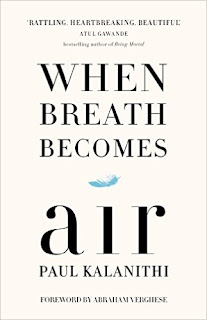 Paul Kalanithi is working towards becoming a fully qualified Neurosurgeon - after having been in training for almost a decade, he discovers that he's got lung cancer and it's clear he has only a few months, or at best a few years to live.

In his memoir, which is written with great honesty and feeling, Paul comes off as a very promising and caring doctor and essentially a really nice guy. He loved literature and his use of language is is lyrical even as what he writes about is immensely relatable - strange that few of us have ever been neurosurgeons. Even the use of medical terms doesn't throw a reader off.

Essentialy, Paul talks about his experience of dying, or rather living with the knowledge that he's got anywhere from a few months to a few years to live. I find myself struggling with how important I think this book is, given that for so many people I know, including myself, our so-called problems just pale by comparison to that of a young man faced with the pain of a debilitating disease and the certain knowledge that death is around the corner.

One of the things that I'm amazed with is that the book contains nothing or very little that I could sense of irony. Paul always had a desire to understand death and to relate to it - the fact that it crept upon him so quickly even as he spent years in training as a neurosurgeon responsible for saving so many lives himself - it seemed like it would have been potent material for a lot of bitterness and irony. If there was any, Paul left it out of his book, and given how honest the book is, I think he possibly chose to let it out of his life.

Paul and his wife Lucy decided to go ahead and have a child, which was the other surprising thing for me - they knew they had a host of problems and limited time with each other, but their choice was to create another life. Even though the other side of the argument is equally rational, which is the simple desire to experience that type of love which comes with having a child of your own - I still feel that it was ultimately a very brave thing to do. On the other hand, it's usually the brave things that are most rewarding, and Paul's note to his daughter at the end of the book is what had me in tears. I would have reproduced it here, but I think it's best discovered in the flow of the book.

Paul never got to finish his book. That is to say, he became too sick to complete it but his wife Lucy took over and she actually completes it for a reader in a beautiful, poignant manner that describes Paul's end and how they took it as a family.

Paul died at the age of 37 in March 2015 ( It strikes me hard - I'm 36). The book was published in January 2016. I've always disliked the word 'posthumous'. Seems to me so pointless - something of note happening after the person has died. But this particular book, published posthumously seems anything but pointless. The exact opposite, in fact.

I read a few reviews of the book before I bought it and I recall the one that said it left a reader unsatisfied because it didn't quite have the 'answers.' But as I read the book, and closed the pages with sadness, I thought the answer was intrinsic in the pages. Yes, life is brief, it is ironic, it is painful, and yet it's incredibly beautiful. The answer is in not losing sight of love.

Posted by Yashodhara at 3:43 AM